Sadhguru visits the Eternal City to ‘Save Soil’ 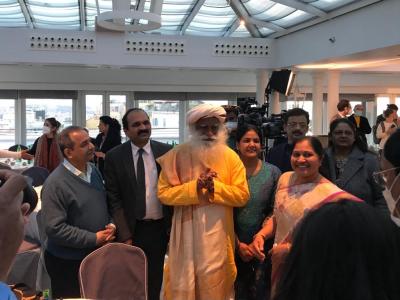 Sadhguru before speaking at a dinner hosted by the Indian embassy in Rome, April 1, 2022. Photo: Louise Nimmo

ROME – An Indian yogi, mystic and visionary known as Sadhguru is using his celebrity status to bring attention to ‘Save Soil,’ an initiative calling to bring back 3-6 percent of organic content in the soil to avert climate disaster. In order to draw attention to the cause, the guru is touring 25 different countries on his motorbike and speaking with citizens, leaders and experts in numerous cities along the way.

At an elegant dinner hosted by the Indian Embassy of Rome, guests including diplomats, FAO executives, and the Indian ambassador, listened attentively to Sadhguru, who spoke for some 2 hours before dinner while sat cross–legged on stage. He spoke authoritatively yet conversationally on topics that ranged from farming to human existence, all relating back to the central subject of soil.

“The problem with machines,” said the revered mystic to his Eternal City listeners, “is they don’t shit.” When an embarrassed laugh rippled through the audience, he repeated himself louder, laughing, “it’s true! Animals put something back to the earth when they are used for farming. Machines just take, and take, and take.”

The ‘Save Soil’ initiative, which, according to the Food and Agricultural Organization (FAO), is “one of the best things that has ever happened to soil scientists,” insists that if humans want to survive with any hope of peace, they must replenish the nutrients that have been stripped from the soil due to intensive farming practices and overuse of chemical fertiliser. More than 52 percent of the Earth’s soil - the largest living system in the known universe - has been degraded, meaning its organic content has fallen below the required minimum to nurture life sustainably.

Another result is that the food it produces becomes less nutritious. According to the Scientific American, our grandparents used to get as much vitamin A in one orange as we do today from eight.

“What will happen to the planet?” asks one audience member. “Will we manage to save it in time?”

“You’re asking for a prediction,” replied Sadhguru. “We need a plan.”

It is estimated that population growth, and food and water scarcity could cause over 1 billion to migrate to other regions and countries by 2050. “What will they do without a plan? It will cause total hell,” thinks the yogi, who says civil wars and starvation will consume our existence if we fail to address the issue of soil degradation.

“Our lives are a chain of carbon flow. The most complex and significant link in this chain is soil.”

“In India they call soil ‘mother,’” he said. “Living in harmony with nature has been an integral part of Indian culture for thousands of years.” In the West, it is often called ‘dirt.’

Complacence, short-term thinking, greed and reluctance to recognise that we are part of the natural world, dirt and all, are among the factors causing us as a species to delay changing our global consumption habits to become sustainable and in harmony with nature.

A self-confessed “terrible pragmatist,” the yoga guru said “grieving over disasters is no use, avoiding disasters is useful.”

Saudi Arabia is facing desertification, yet they can build golf courses which look like Scotland. Governments “definitely have the budget to make things organic,” he said, adding, “the market needs to be convinced.”

Not only is the figurehead of Save Soil appealing to governments, he said that everyone has a responsibility to “be curious about where their food comes from.”

He urges people to use their social media platforms, which mean one person can have more reach than ever before in history, to spread the word about Save Soil, before it’s too late.

“If you want to say I love you to your child,” said the Indian Ambassador to Rome Dr Neena Malhotra, “you must say ‘Save Soil.’” 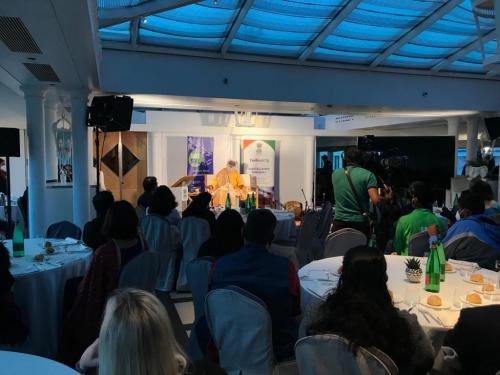