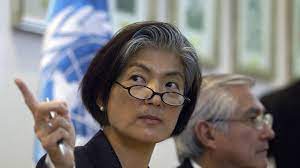 Kang Kyung-wha (left)
SEOUL -- South Korea has been lobbying governments heavily to support former Foreign Minister Kang Kyung-wha's bid to become the first woman director general and first Asian leader of the ILO as the campaign for Friday's election enters final stages, diplomatic sources say.
"The result will largely boil down to who can garner more votes from the ILO’s government group, which comprises 10 permanent member states including Brazil, China, France, Germany, India, Italy, Japan, Russia, the UK and the US, as well as 18 other countries that are elected -- of which South Korea is not included," the Korea Herald said.
Kang, the country’s first female foreign minister, is competing for the ILO helm along with four other contenders including the president of the International Fund for Agricultural Development (IFAD), Gilbert Houngbo of Togo, who has served as deputy director general of the ILO in the past and is the emerging favourite, Mthunzi Mdwaba of South Africa, vice president of the International Organization of Employers, Muriel Penicaud of France, former labor minister, and current ILO Deputy Director General Greg Vines of Australia.
A victory for Houngbo would set-off another leadership battle at IFAD to replace him as president, with IFAD vice president Dominik Ziller, recently in the news due to office romance at the agency, poised to take over the helm of the Rome-based agency in an interim capacity pending new elections,
Horsetrading behind the scenes of the ILO contest has seen France lobbying Europe to support Mme Penicaud rather than Greg Vines following the spat between France and Australia over a submarine contract while the UK and the United States are expected to vote for him.
The election will take place in Geneva, Switzerland, on Friday, during the session of the ILO’s Governing Body. There are a total of 56 votes, split between 28 from the government group, 14 from the workers group and 14 from the employers group.
Whoever wins the majority of the vote will become the next leader starting in October, when current Director General Guy Ryder of the UK leaves office.
It is expected to be a tight race. Houngbo is backed by the world’s largest trade union group, the International Trade Union Confederation, while Mdwaba, as the vice president of IOE has significant support from members of the ILO’s employers group, the sources said.
The South Korean government has been making an all-out effort to back Kang’s candidacy, with SOuth Korean President Moon Jae-in and other ranking officials asking for relevant countries’ support for Kang’s bid.
"While Kang has an unrivaled career and expertise in international organizations and foreign affairs, her lack of relevant experience in labor issues could hurt her chances, observers say," the Korea Herald said.
The Korean Confederation of Trade Unions, one of the country’s two umbrella labor organizations, refused to support Kang, saying her experiences and stated vision are “quite far” from the job description for the top post.
A veteran of multilateral diplomacy, Kang is widely respected for her leadership as the country’s first female foreign minister from 2017 to 2021, during which she witnessed historic summits with North Korea and other diplomatic accomplishments during a particularly tumultuous period.
Before her stint as minister, Kang enjoyed a long career at the United Nations, serving as a senior policy adviser for both former Secretary-General Ban Ki-moon and current Secretary-General Antonio Guterres.
In 2006, she was appointed as deputy high commissioner at the UN Human Rights Office -- equivalent in rank to the UN deputy secretary-general -- making her the first Korean woman to hold such a high-level position in the UN.
jf 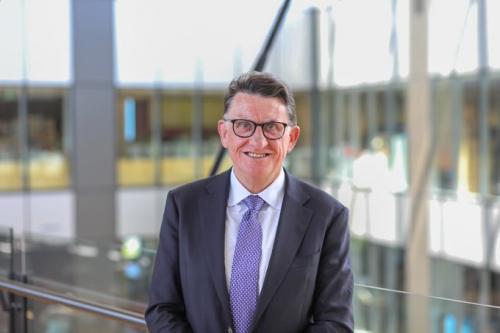