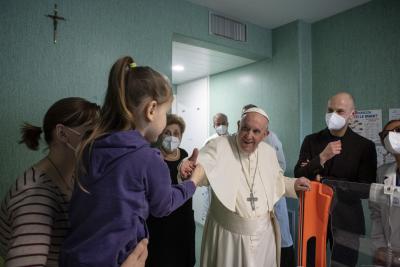 VATICAN CITY -- Pope Francis issued another passionate appeal Sunday for a halt to what he called "this repugnant war," in Ukraine, recalling the wounded Ukrainian children he met the previous day at the Vatican's Bambino Jesù hospital where they are being treated.

"I went yesterday to Bambino Gesù to see the wounded children," the pontiff said during his weekly Angelus address to pilgrims in St Peter's Square. "One of them had lost an arm and was wounded in the head.
The Argentine pope recalled that thousands of old people and children are unable to leave Ukraine, trapped by the fighting. "All this is inhuman, in fact it is sacreligous, because it offends the sacred nature of life."
"It is an inhuman and sacreligious cruelty, let's not forger that.
"We are close to this martyred Ukrainian people ... Let's not tire of welcoming people, also in the coming weeks and months. Let's think of these women and children, who with time, separated from their husbands, will be surrounded by vultures."
jp
U.N.
Embassy Row
World