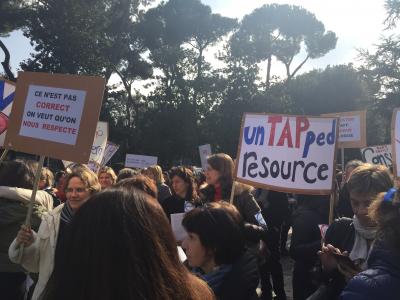 ROME -- A former FAO employee has won a hard-fought victory and was awarded damages in a lengthy legal battle against the UN agency management after the ILO Administrative Tribunal recognized her right to obtain a copy of a selection report to be satisfied that the selection process was not biased against him, FAO sources said.

FAO watchers said the ruling was a significant blow against the notorious culture of secrecy at the Rome-based agency that encouraged appointments on grounds of croneyism and nepotism rather than on merit.

In 2016 a case was brought forward by a former staff member from the temporary assistance pool (TAP), Désiree Kedjour, who had been working in FAO for some time but who had failed to be selected to a position and whose short term contract was subsequently not renewed due to the implementation of AC 2015/07 (limiting short-term appointments).

Ms Kedjour appealed to the Director General, José Graziano da Silva, against the non-renewal of contract and again requesting a copy of the redacted selection report. The appeal was rejected by the Brazilian DG, so an appeal with the Appeals Committee was lodged. In 2018 the Appeals Committee was provided with a redacted copy of the report in question, and it finally recommended that the redacted report be given to the complainant immediately, as well as an award for moral damages for breach of procedural fairness.

However, the then Director General rejected the recommendation, at which point Ms Kedjour filed a case with the Tribunal.

The ILO Tribunal restated a principle considered in Judgment 3586 “...that a staff member must, as a general rule, have access to all evidence on which an authority bases or intends to base its decision against her or him, and that, under normal circumstances such evidence cannot be withheld on grounds of confidentiality, unless there is some special case in which a higher interest stands in

the way of the disclosure of certain documents. Such disclose may not be refused merely in order to strengthen the position of the Administration or one of its officers”.

In addition the ILO Tribunal reiterated “... that equality of arms must be observed by ensuring that all parties in a case are provided with all the materials an adjudicating body uses in an internal appeal and that the failure to do so constitutes a breach of due process.”

On the basis of this the ILO Tribunal considered that FAO should have disclosed a copy of the redacted report to Ms Kedjour, as although the MS 305 recommends that the discussions and minutes of the GSSC are strictly confidential, this does not shield the report regarding the results of the selection process from disclosure with appropriate redactions to ensure the confidentiality of third parties.

The Tribunal also set aside the decision not to renew the short-term appointment based on AC 2015/07 as it had already deemed the Administrative Circular unlawful in February 2020 (Judgment 4230). Therefore, Ms Kedjour was awarded material damages as well as moral damages for the breach of procedural fairness (due process).

“In our opinion, this judgement confirms the overwhelming necessity for transparency in recruitment processes,” a Union official source said.

“We look forward to receiving the draft on new recruitment policies, which we are hopeful will contain all the checks and balances needed to guarantee a sufficient level of integrity

and trust in the process, as well as a defined role for the recognized Staff Representative Bodies. “

The case recalled Italian Insider’s disclosure of croneyism and nepotism In a number of appointments at the FAO, notably the rigging of the appointment of the agency’s Latin American Press Officer connived at by then FAO press officer Mehdi Drissi.

Two well qualified women candidates were rejected in the selection process as Drissi rigged interview reports to ensure that the post went to a relative of the Socialist mayor of Santiago, Chile, as then Director General Jose Graziano da Silva wished.

The Rome Tribunal acquitted Italian Insider chief editor John Phillips of defamation charges brought by Drissi over the reports Insider published over the Toha affair. Judge Riva ruled against Drissi after a defense witness told the court that Drissi had ordered her to help him ensure that the lacklustre Chilean candidate get the prestigious job rather than the two French and Venezuelan women candidates.

The case was believed to be just the tip of the the iceberg of croneyist appointments at FAO and contributed to Graziano launching multiple lawsuits against the Insider’s chief editor to try and silence the newspaper. Phillips last year lodged an appeal with Italy's Supreme Court against convictions for "tarnishing the image" of the FAO and three other FAO executives as well as Drissi in other reports.