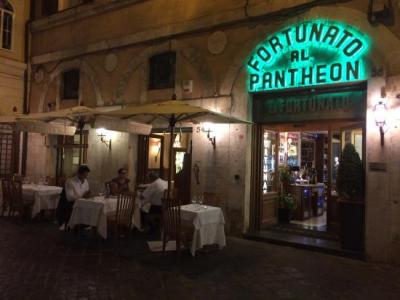 ROME – A restaurant next to the Pantheon has been penalised for a second time because the owner went to his workplace without Green Pass, local police said.

The Repubblica newspaper described the restaurant, Da Fortunato, as “a place openly against the obligation of the Green Pass.” As part of the paper’s investigation, the owner, Jason Baldassari, spoke unequivocally about his anti-vaccination stance, which is “anti-vax and anti Green Pass."

Following this publication, police returned to Baldassari's restaurant for a second time on Tuesday. The situation was exactly the same as the first time, despite the previous warning.

Police released a statement saying, “since we have found the irregularity again, the communication to the Prefecture will start, which will verify the situation and evaluate any closure measures, that may take between five and 30 days.”

Baldassari has already declared that he will appeal against the punishment.

In Rome there have been other premises inspected and fined by the police in recent days. The reasons for fines vary from lack of social-distancing to not checking the Green Passes of the customers. Among the punished places was also Dar Bottarolo restaurant, which was closed for five days.

The inspectors use various online sources for example a Telegram chat titled, “Anti-Green Pass Merchants” as well as Umap and Animap. These last two are platforms with maps containing information about No Green Pass places. On the Animap website, pandemic related restrictions are considered a form of discrimination.