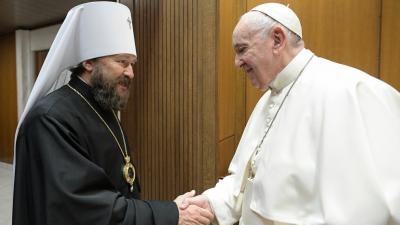 VATICAN CITY – Pope Francis met the Metropolitan of Volokolamsk, His Eminence Hilarion Alfeyev, in the study of the Paul VI Hall at 7:50 Wednesday morning, before his General Audience, the Holy See said.

During the conversation, which had a fraternal tone, the pair discussed issues that are a cause of common concern. Both leaders are committed to the search for concrete human and spiritual answers to the questions raised.

The pope gave thanks for the good wishes for his 85th birthday, brought by Metropolitan Hilarion on behalf of him and of Patriarch Kirill. The pontiff expressed sentiments of affection and closeness to the Russian Church and to its Patriarch Kirill, who recently celebrated his 75th birthday, recalling with gratitude the journey of fraternity made together and the conversation they had in Havana in 2016.

After the meeting, the Pope and the Metropolitan exchanged gifts. His Eminence Hilarion presented an icon of the Madonna, while Francis gave a mosaic depicting the Madonna and some volumes of papal documents - the Message of Peace for 2022 and the Document on Human Brotherhood.

Shortly before 8:50 a.m., the Pope and the Metropolitan took their leave.