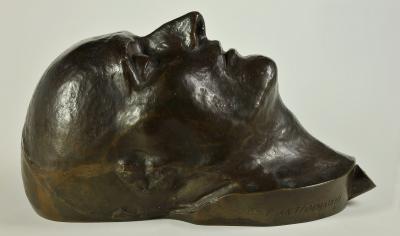 ROME -- The exhibition ‘Napoleon’s last act. Exile, death, memory,’ which opened at the Napoleonic Museum on May 5 - the 200th anniversary of his death - and runs until Jan. 9, presents the materials of the museum's collections with the aim of reconstructing extreme moments of the Napoleonic epic starting from the arrival of the defeated Emperor on the island of Saint Helena, remote English dominion in the South Atlantic.

The Napoleonic Museum in the Eternal City has a nucleus of materials of important historical value, never presented in its entirety, linked to the events of the Emperor's exile and death in Saint Helena as well as to those concerning the triumphal return of his remains to Paris in 1840.

The exhibition illustrates the epilogue of the Napoleonic course through an evocative visual story, constructed through a rich iconographic corpus of prints, paintings and sculptural and images on coins. The exhibition is divided into four sections - St. Helena, the last island, Relics from exile, "Il n'est plus" and The return of the ashes to Paris in 1840 - and consists of about 85 pieces. The selected material comes entirely from the collections of the Napoleonic Museum.

The exhibition enhances the significant nucleus of objects linked to the years of St. Helena owned by the Napoleonic Museum. The iconic funerary mask from the cast of the face taken by the doctor Antonmarchi immediately after Napoleon's death and numerous "contact relics" stand out. These are precious snuffboxes, parlor games, books from the library, refined fabrics and clothing used daily by Napoleon during his last exile - memories, therefore, endowed with extraordinary historical and symbolic value. Napoleon himself was aware of this, so much so that he expressed in his testament - a copy of which is present in the exhibition - the will, then disregarded, to assign these objects to his son, to whom they would transmit the essence of his spirit.

The visual narrative is intertwined with the theme of Napoleon's construction and transmission of the memory of his own history, evoked by the presence of documents and volumes, such as the example of the Memorial of St. Helena by Emmanuel de Las Cases owned by Napoleon's son. Napoleon's one towards Saint Helena and the other, backwards, of his ashes towards Paris, are journeys across the two hemispheres of the earth, "from one to the other sea" one could say by borrowing and reinterpreting Manzoni's verse of the ode Il Cinque Maggio. The exhibition aims to follow the routes and illustrate the results of these journeys, recalling their suggestions, and is accompanied by a series of cultural events.

To celebrate the anniversary of May 5, on Sunday 9 May the museum published online the video of an intimate theatrical matinee entitled ‘In a few words, this is my story.’ Napoleon’s last act, realized with the collaboration of the Central Italy-Rome Delegation of the Souvenir Napoléonien and the Teatro di Roma. The play, taken from the text by Emanuela Pistilli and interpreted by the actor Simone Francia, with musical accompaniment, brings to life the words of an intense personal diary on Napoleon's last days in the timeless space of the museum.

The exhibition, curated by Elena Camilli Giammei, is promoted by Roma Culture, the Capitoline Superintendency for Cultural Heritage. Organization of Zètema Progetto Cultura.

For the occasion of the exhibition, the Friends of the Museums of Rome Association generously financed the conservation maintenance of the prestigious series of lithographs depicting the Return of Napoleon's Ashes to Paris in 1840, the focus of the final section.