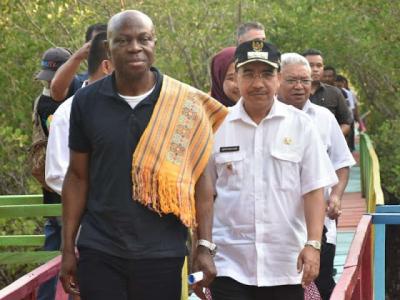 ROME -- IFAD staff's anger over what they see as the lack of trustworthy leadership of the UN agency has extended to the sleepy Executive Board of the troubled poverty-busting organisation for allegedly failing to carry out its oversight role of the institution, IFAD sources say.

The International Fund for Agricultural Development, a development bank for small farmers, has been rocked by President Gilbert Houngbo's surprise candidature to become head of the International Labor Organization (ILO), just six months after being elected to a second term at the helm of IFAD, and by what are seen as a rash of spurious appointments including one to allow the African lover of the agency's German vice president to remain in the Eternal City in a cushy liason job at the FAO on a D-1 director level salary.
Frustration over the leadership crisis boiled over into an open letter to Houngbo by the IFAD staff association that barely stopped short of demanding the former Togolese prime minister's resignation.
"In recent board meetings not one question was apparently asked about all this," a veteran IFAD watcher said. "That is just as big of a scandal. It’s the member countries’ organization and their tax payers money who finance the UN agencies."
"Yet they are not fulfilling their role as representatives and asking even the basic due diligence questions."
"Staff are now totally desperate by the lack of trustworthy and reliable leadership," the source continued. "They are almost just as angry with the Executive Board. They, the Board, know what’s going on but are doing nothing apparently and yet it’s their key role in oversight of the institution."
Part of the problem is that Houngbo himself is chair of the Executive Board.
"In general the UN system lacks proper oversight and control mechanisms," one observer commented. "The Head of an UN agency is almost untouchable in today’s system set up."
"A staff member who is mishandled or badly treated cannot go to the national court of labor or similar as they don’t apply to UN agencies. So these staff live in a vacuum legally. And IFAD's President took IFAD out of its membership of the ILO Tribunal, one of the few remaining avenues for appeals by a staff member."
"But the member countries in the board can and should raise their voice. It’s their institution."
Once seen as a fiefdom of OPEC countries, IFAD's largest donors are the United States, Italy, the UK,  France, Germany, the Netherlands, Sweden, Norway, Canada, China and India.
jf
U.N.
Embassy Row