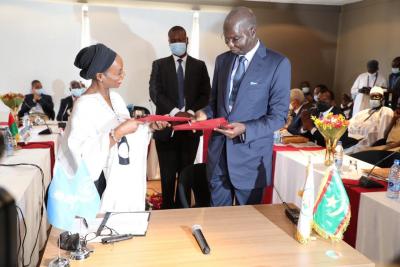 ROME – IFAD staff members have lambasted president Gilbert Houngbo, saying that the conflict of interest posed by the former Togolese prime minister’s candidature to become the director general of the International Labour Organization (ILO) and a rash of dubious senior appointments throw into question the head of the poverty-busting UN agency’s integrity. Staff also lashed out on the record at the agency's flamboyant vice president who allegedly arranged for his African lover to obtain a bogus director level job at the FAO so that she can stay near him in Rome on a sky-high salary.

In an unprecedented open letter to Houngbo following an extraordinary General Assembly of the 300 IFad Staff Association members held Nov. 2,  staff members urged Houngbo to “openly address staff concerns, dedicate more time and attention to IFAD and its staff in this moment, or consider distancing himself from the organization during the period of his ILO campaigning,” saying recent developments at the troubled Rome-based organization “have compromised the trust and confidence of staff in senior management.” Houngbo outraged staff by throwing his hat into the ring to head the Geneva-based ILO just six months after he was re-elected for a second term as IFAD president.

“Staff are deeply committed to IFAD, and look at management as role models that exhibit the highest levels of ethics, fairness and transparency,” said the letter seen by the Italian Insider. “In recent months, a growing number of staff have reported to ISA that they are extremely concerned with the perceived lack of transparency and accountability by IFAD’s leadership, which may undermine the credibility and reputation of the Fund.” The letter stopped short of asking Houngbo to resign but was an unusually strongly-worded criticism of a UN agency chief by normally quiescent international civil servants.

“Colleagues across the institution question the head of the institution’s ability to devote his entire and unfettered attention to the Fund and its mandate in the wake of his candidacy for the position of Director General of the International Labour Organization (ILO)," the letter continued. "The Agreement Establishing IFAD (Article 6, Section 8 (f)) states: The President and the staff, in the discharge of their functions, owe their duty exclusively to the Fund…”

“Staff are concerned by the inherent conflict of interest therein.  Even if campaigning is done entirely on the President’s own time, the overlap between ILO and IFAD membership puts into question every decision by IFAD’s President.”

The staff also voiced concern over the activities of IFAD Vice President Dominik Ziller, who has raised eyebrows recently with his penchant for office romance.

“Staff call into question the perceived conflict of interest and objectivity of the Vice President in discharging his function as Chair of the OSC and the Appointment Board with regards to WCA Division,” the open letter said.

Staff also “highlighted the need for a UN agency and public institution to have an effective system of checks and balances. The internal offices that are supposed to ensure compliance with the rules – the Ethics Office and the Office of Audit and Oversight – report directly to the President. Staff questioned the ability of these offices to deal in an independent and impartial manner with ethical matters that involve Senior management.” Such concern dates back at least to the regime of former president Kanayo Nwanze, IFAD watchers say.

The vote of censure at the assembly “demonstrates extreme concern with the lack of transparency in recruitment and promotion processes,” the letter continued. “Recent management-driven transfers of directors and promotions of EMC members to AVP level are perceived as applying double standards and preferential treatment to management positions, especially in the context of the abolishment of posts for GS and some national staff.  Furthermore, a new Director’s position – not in IFAD’s organigram at that time – was created for an internal candidate selectively accommodating personal circumstances of a senior manager. Staff consider them not transparent and in contravention of HR Policy requiring open competition for all positions and equal opportunities for everyone.”

This was a reference to Houngbo’s promotion of American lawyer Katherine Meighan and Italian honcho Alberto Cogliati to become vice presidents and to the appointment of Ziller’s lover, former African director Nadine Gbossa, to a newly created ‘bogus’ job as Director of Food Systems Coordination based in the office of the Food and Agriculture Organization DG Qu Dongyu.

“Staff are concerned about the level of subjectivity in professional staff appointments by the appointment board as increasingly not aligned with the recommendation of the interview panel,” the letter continues. “There is widespread perception that appointments are inappropriately influenced by political inclinations and that favouritism is shown to people in close proximity to senior managers.  A significant number of appointments have been perceived by staff as violating the principle of the first and foremost criteria of ‘securing the highest levels of competence and technical ability,’ as required by IFAD’s HR policy.”

“IFAD has gone through several years of extensive and expensive reforms. While the stated intention is to improve IFAD’s capacity to deliver and to support member states, thus far the results have been mixed,” they said.

“Staff question the rationale for an organization of IFAD’s size to undergo multiple and complex staff reassignments that have obliged staff to change their units and teams for the sake of change alone, and moved staff away from their areas of specialized technical expertise gained over decades of study and professional experience. Staff question whether there is any benefit to the organization’s performance and technical credibility.”

“While staff fully support the goals of decentralisation, the pace and manner in which it is being implemented raise grave concerns. Some staff are being asked to move to the field before the locations of Regional offices have been finalized. Others have been moved before the offices are established or equipped, leaving staff working from hotels or temporary locations without enough information on the actual office location for them to be able to rent accommodation, enrol children in schools or bring their families.”

“The downgrading of National Officers positions while the Job Audit is still underway seem to be in direct contravention with the core of decentralisation, which requires stronger country teams and empowered National staff. The planned abolishment of posts at headquarters and in the field is also of grave concern as this thwarts the ability of the organisation to operate effectively. “

“An unfavourable working climate has affected staff morale for some time, as evidenced by the 2018 Global staff survey, which indicated management problems that the organization has yet to address.”

“In response to the above concerns, IFAD Staff Association calls upon Senior management to take the following actions to regain staff trust and demonstrate its commitment to fairness and transparency:”

“The IFAD Staff Association is committed to working with management on rebuilding staff trust and enhancing staff engagement to allow IFAD to serve its member states and deliver on its mandate.”

"We call upon IFAD’s Senior management to consider the proposed measures and provide responses to staff no later than 1 December 2021,” the open letter said. It was unclear whether staff might consider strike action if management does not respond. Strikes erupted at sister agency FAO when the then director general José Graziano da SIlva implemented unpropular measures, sacking large numbers of long-serving employees in the IT and other divisions. 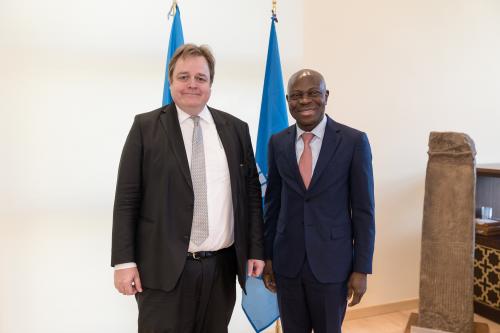