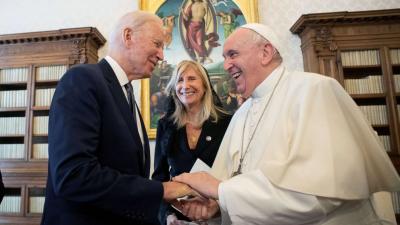 President Biden at his audience with Pope Francis

VATICAN CITY -- U.S. President Biden had a lengthy audience with Pope Francis Friday in only the second meeting between a pontiff and a Roman Catholic American President, Vatican sources said. The White House said the two men met for over an hour and 15 minutes, longer than expected and longer than audiences France gave to Presidents Trump and Obama.

Biden arrived in the Vatican at noon for the audience with the Argentine Francis and later was meeting Italian government leaders Friday amid tight security after arriving in the Eternal City to attend the G-20 summit. Biden's audience marked the second time a Catholic US president met with a pope in the Vatican after John F. Kennedy.

The Vatican recently cancelled live television and pool coverage of the audience, sparking a protest from the Vatican Correspondents' Association. Vatican watchers would have been watching the body language between the two leaders closely, given their differences on abortion.

Biden and First Lady Jill were to be received in the Vatican by the pontiff after Francis gave another audience to the Korean president. Later Friday Biden was due to meet with Italian Prime Minister Mario Draghi, Italian counterpart Sergio Mattarella and with French President Emmanuel Macron.
Biden left Leonardo da Vinci airport for Rome at 2.45 a.m. under heavy escort.
jp
Embassy Row
World