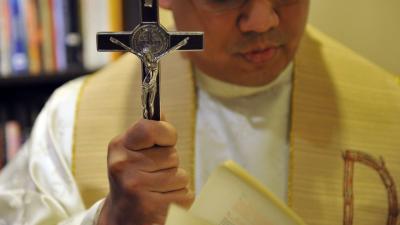 ROME - Enrollments in a course on exorcism at the Sacerdos Institute of the Pontifical University Regina Apostolorum have increased significantly over Covid-19 as "with the virus, requests for psychological support are growing," Il Fatto Quotidiano have found.

The current “exorcism and the prayer of liberation” course began Monday and runs until Saturday, this being the 15th time it has been taught. There are 137 students taking part in this round, 100 in person and 37 online.

According to the organisers, the course is the only one of its kind in the world, offering “careful and multidisciplinary academic research on the ministry of exorcism and the prayer of liberation.” They define it as “a concrete, in-depth and professional response to this current and often still little-known issue,” referring to possession by the devil.

This year in particular, the course explores research on exorcism carried out by Sacerdos Institute in collaboration with the GRIS and the University of Bologna - a round table discussion between exorcists of different branches of Christianity. It also features teaching by French priest and expert in healing prayer, Don Olivier Rolland. The subject is taught in Italian but simultaneously translated into English and Spanish.

The coordinator, Father Luis Ramirez, commented on its surge in popularity. "Today, compared to the 1990s, for example, there is a greater awareness of this issue in the Church, both on the part of the bishops and of the laity."

Interest has also been fueled by Pope Francis, who has spoken on the subject. "If we enter into dialogue with the devil,” he warned, “we will be defeated.” He has emphasised, "with the devil there is never a dialogue. When he takes possession of a person's heart, he remains there and does not want to leave it.”

"Please,” the pontiff has urged, “we do not do business with the devil."

One reason why the pope has addressed the subject is because there are many Christians who deny the devil’s existence. Internationally renowned exorcist, Friar Benigno, commented on the ‘issue.’ "Denying the existence of the devil and, consequently, the possibility of disturbances of diabolical origin, means not understanding the meaning of the Rite of exorcisms, a liturgical text that the Church has placed in the hands of us exorcists.”

He defends the practice with the following argument. “If, in fact, the devil and the demons did not exist, then what sense would the exorcisms made by us in the name of the Church have? We would be commissioned by the Church to fight beings that do not exist in her name? It is absurd to just think of it.”

Friar Benigno has a clear message - "those Catholics, who still persist in not believing in the existence of the devil and demons would do well to withdraw from this position and finally open up to the revelation that God has made of this truth.”

Other theories for the rise in popularity of exorcism include the spread of Pentecostal churches and, according to Friar Benigno, the growing use of tarot cards and 'sorcery.'