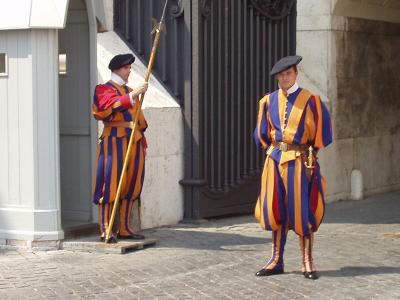 VATICAN CITY - Three Swiss Guards who refused the Holy See’s order to be vaccinated against Covid-19 have voluntarily resigned from the historic position and returned to Switzerland, a Swiss Guard officer said. Another three guards have been temporarily suspended for the same reason.

Lieut. Urs Breitenmoser said in a statement that all Swiss Guards had been asked to be vaccinated “to protect their health and that of the others they come into contact with as part of their service.”

“Three members of the Guard have chosen not to adhere to that request, voluntarily leaving the corps.”

Pope Francis, who has been vaccinated against COVID-19, has repeatedly stressed the altruistic and health value of receiving the shots during the pandemic, calling them “an ethical obligation” and “an act of love.”

One of the guards who resigned, Pierre-André Udressy, wrote an open letter to defend his stance. He cited that, “the frequency of fatal accidents after vaccination is "underestimated,” and claimed that “the vaccine is the cause of death in 30-40 per cent of autopsies of recently vaccinated people” according to the Director of the University of Heidelberg, Peter Schirmacher.”

Udressy also claimed that the Holy See’s choice to use Pfizer - “produced by cellular strains of human fetal abortion origin” - placed him in a moral dilemma.

The three guards who resigned were younger members of the corps. The other three are provisionally suspended from service until the vaccination cycle is complete.