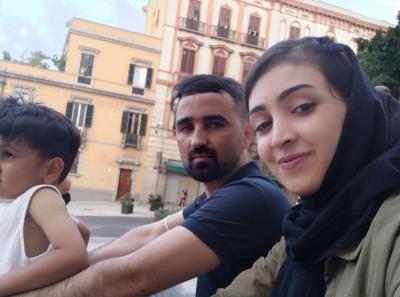 Fazlullah Moslim with his wife and son. Photo credit: F.Moslim

CAGLIARI, Sardinia -- The Doha Agreement between the Taliban and the United States was a nightmare for many in Afghanistan and a wake-up call to finally visualize the Taliban rule of the country once again after twenty years of fierce fighting and destruction. Not many could have imagined living under Taliban rule. Many believed that it’s almost impossible for the Taliban to capture even a district and hold on to it for a whole week. However, a harsh reality was taking shape swiftly. Districts began to fall to the Taliban reinforcing their position of power followed by their capturing entire provinces. The Taliban made rapid advances across the country where they faced minimal resistance by the government forces.

As a collaborator of the Italian troops in western Afghanistan, I was fearing for my life under the Taliban. It had been two months now that I was desperately trying hard to get my voices heard along with another group of nearly 10 ex-interpreters. We spent hours googling for contact information of Italian government officials, parliament members, human rights activists, journalists and anyone who would possibly stretch a helping hand.The first reply I received was from the Italian embassy in Kabul confirming the receipt of my email, but no further communication was made.

After quite a while, we joined other groups of ex-collaborators of Italian troops in Herat province and we became a larger group of roughly 60 people. A few of these interpreters were able to receive replies from the Italian authorities who were working to help us arrive in Italy. Only those who had Italian friends in the Italian Army or Police could get an answer. For communicating quickly, we selected a representative in order to prevent waste of time. The representative was responsible for organizing sessions among us to collect and submit all the necessary documents.

The Taliban were advancing swiftly capturing more territory. Nimrua, Farha and Helmad provinces, neighboring provinces to Herat, collapsed and the Taliban were already in rural areas of Herat. Ismael Khan, a former Mujahedin, and his fighters were the only forces resisting Taliban in the outskirts of Herat city. The people of Herat were campaigning through social media to support the people's resistance, however, the outcome was undermined by the Taliban’s gains across the country.

People of means were leaving for Kabul to fly to other countries as flights were available and once the airport stopped operating some were panicking over their exit because of the fighting along the traveling roads. Herat Airport's flights were limited and suspended for some days due to heavy clashes. To keep a low profile, I had to move from one place to another every couple of days to take care of my four-year-old son, Mostaon, and my wife Wadia. In the following days, the Taliban captured the province entirely and all government officials either fled the province or surrendered to the Taliban. Herat fell to the Taliban with minimal clashes; almost without resistance from the government side.

My plan was to go to Kabul but unfortunately I wasn't able to find a flight and the road was too dangerous to take. The Taliban were everywhere now and I was stuck and terrified about the situation and ran out of options and time. The fear of retaliation and retribution from the side of the Taliban was giving me nightmares at night.

The following day I received a call from our group’s representative to arrive in Kabul for evacuation. For many of our friends it was hard to make any move since we hadn’t received a call through an official channel until the audio file of an allegedly Italian general was posted in our Whatsapp group calling upon all of the former interpreters to arrive in Kabul. I didn’t hesitate to get on a bus with my family along with three of my close friends and their families heading to Kabul. The road was unexpectedly safe but fear was all over the place. Throughout the journey, the Taliban searched us and briefly questioned us multiple times.

We arrived in Kabul after 25 hours; exhausted and pressured. Kabul was not as crowded as it used to be except for Kabul Airport. We had to wait in Kabul hotels until our entering was coordinated because of the chaos that had taken place at the airport. After a couple days, we were asked to arrive at the east gate of Kabul Airport. Our representative, Ali Safdari, was allowed to go inside. The rest of us, who were more than 300 people, were in limbo. Only specific people who had friends among Italians were fortunate enough to find their ways inside.

After three days of waiting in an overcrowded gate in the open air, exhaustion, and going without food and water, we decided to go back to the hotel. My wife and son couldn't take it anymore. The next morning we were asked to arrive early in the morning. This time all the airport roads were blocked by the Taliban which added to our already desperate situation. I promised myself and my wife to stay strong for our son and not to give up. We walked one hour into tiny valleys to finally find a narrow passage leading to one of the airport’s gates.

The crowd at the Airport gates was doubling in size every single day. It was almost impossible to get close to the foreign soldiers at the gates. We waited in the sun for hours until it was late in the afternoon. We inched towards the gate until we were 20 meters away from the British soldiers but unfortunately there were no Italian soldiers waiting for us. We had to show some documents, visas, green cards to enter the airport but we had nothing. My cellphone was not working properly because of the jammers used by the foreign troops at the gates. The plan for us was to arrive at the gate and Italians would recognize us according to a list that was verified before.

Coincidentally, two women with children, whose husbands were already in Italy and Germany, turned out to be from Herat and my colleagues in the Italian military base in Herat. We got to know each other and spoke for a short time. They asked me to help them out as I was the only man among the three families. Their husbands knew some Italian special forces who were at Kabul Airport as part of the Italian task force to secure the evacuation process. Now, I was answering the calls from Italy and Italian special forces inside the airport. I was helping these two women as an interpreter. I remembered only some Italian words and phrases from ten years ago. Luckily that helped me along the way to communicate between them and become part of the group.

After a few hours of coordination and communication, two Italian special forces finally showed up at the gate. We were supposed to wave a piece of paper on which we wrote ‘ITALIA’ because it was hard to recognize someone by other means in a crowd like that. The two Italian soldiers spotted us. After a few attempts, we were at the feet of the soldiers guarding the entrance but the British soldiers prevented us from entering due to orders that the crowd had become unmanageable. We returned in despair and exhaustion but were told to arrive at another gate as soon as possible. It was another 20 minutes walk but the kids were too tired and I had to give some of the kids piggybacks.

Max, an Italian special force soldier, was waiting for us again. This time he apparently had a written permission to get us inside and it worked. The US and British soldiers shouted our names and we responded back. One of the soldiers spotted us and quickly stretched his hand to help me get over a concrete block burrier. I was the first person among the 15 of us who were supposed to enter and my wife was right behind me. As soon as I jumped to the other side and saw my wife and the other two women with children cross, all my pain and sufferings of these several days were gone. We were searched and then transported to a tent set by the Italian troops.

I am not able to find the right words to describe my feelings at that moment; it was a mixture of feelings, emotions and thoughts. Two of my best friends from Herat didn’t manage to enter the Airport and returned to Herat and I was extremely unhappy about it. Later, I heard that many others weren’t as lucky as we were and were left behind. We had to wait another three days for our flight. Finally our flight was ready and we were on the list to be evacuated. As soon as I received the order to go towards the aircraft, I couldn’t stop crying all the way from the tent to the airplane. My brain wasn't able to process the recent incidents and how quick it happened.

We arrived in Rome the next morning after a short layover in Tashkent and Frankfurt. My son was the happiest in the world and was already receiving more attention and care. Following a two-week quarantine in a hotel in Rome, we were transferred to Calgiari in Sardinia. We value freedom in a free society as much as we value air in our lungs and we are determined to give back as much as possible through being active members of Italian society.