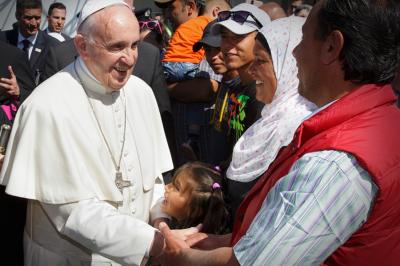 VATICAN CITY - Pope Francis has released a video encouraging all to “dream together as a human family” in the run up to this year’s ‘World Day of Migrants and Refugees’ (WDMR). The video features two Venezuelen women who migrated across the country in order to fulfil their ambitions, as well as a speech from the pontiff.

The WDMR will take place this Sunday and this year’s theme, chosen by the pope, is ‘Towards an ever wider ‘we’.’ The video is part of his project to ensure that “after all this, we will no longer think in terms of ‘them’ and ‘those’, but only ‘us’.”

The first woman in the video, Àngeles Carolina Cabello Carbajal, found an opportunity through the church to take a dressmaking course in Cúcuta, Colombia, many miles from her native region of Maturn in Monagas State, Venezuela. She says the project “gave me the opportunity to dream, because I never really thought I could operate a machine.” She continued, “it gave me a lot on a personal level...feeling support where I didn’t really have it, it was a beautiful experience.”

The second lady, Antonielis Rodriguez Habana, says “I was afraid of dreaming of a better future because I am a mother of four children and coming here with nothing was very scary.”

“Now I believe that we should not be afraid of what we do not know,” says Carbajal. In reaffirmation of the pope’s intention for the weekend’s event, Habana comments, “I say, don’t be afraid to dream.”