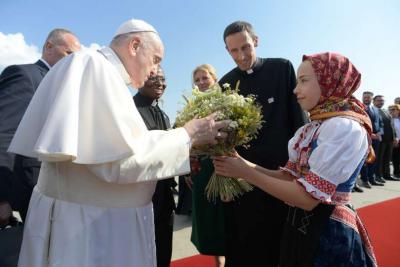 Pope Francis has just returned from a four-day visit to Hungary and Slovakia. Photo: Vatican Media

ROME - Pope Francis has said the Holy See is working out what to do about a group of cardinals who refused to be vaccinated against Covid-19, one of whom, Cardinal Raymond Burke of New York, was treated in intensive care after he contracted the virus.

In an interview with the media on the return flight from Slovakia, the pontiff said that even among cardinals there are “some [covid] deniers.” He expanded, saying “in the Vatican, everyone is vaccinated except a small group that we are working out how to help.”

During the interview, broadcast by TV 2000, the pope also mentioned that there is a cardinal "hospitalised with the virus, poor fellow," referring to Burke, who has recently been moved out of intensive care but remains in hospital.

The pope judged the division on vaccines "strange," saying "humanity has a history of friendship with vaccines. Against measles, polio, all children were vaccinated and no one said anything. Perhaps what is happening now is due to the virulence and uncertainty not only of the pandemic, but also of the diversity of vaccines.”

According to the pontiff, “this caused fear in the people. Then others who say it is a danger because with the vaccine the virus gets inside you. So many arguments that have created division. I don't know how to explain it well, some explain it for the diversity of vaccines, which are not sufficiently tested, and they are afraid. We must clarify, and speak calmly.”