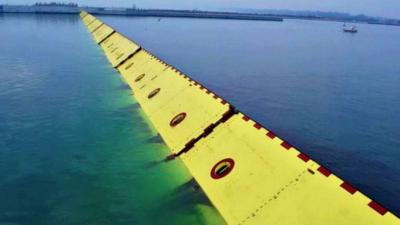 VENICE - “MOSE”, the flood barrier project that “will save Venice” is now not expected to be finished before the end of 2025, according to a timeline found in a document signed by key members of the project. It is the latest of numerous extensions to its deadline, as the project has been hindered by disputes, corruption and cost overruns, as well as problems concerning erosion. The system also came under fire in November 2020, when an inaccurate weather forecast meant the mobile gates were not raised in time to prevent yet more floods in the city.

Despite wide circulation that the barriers will finally be completed by the end of 2021, a reporter for Il Fatto Quotidiano has read the document that reveals a further four year wait. Entitled “General Time Schedule of Interventions”, the paper has been signed by the new interim supervisor Fabio Riva, the construction site commissioner Elisabetta Spitz and the liquidator of the “Consorzio Venezia Nuova” Massimo Miani, under the direction of Ilaria Bramezza, executive of the Ministry of Infrastructure.

The time schedule covers 10 sections, each of which is divided into interventions already in progress and work that is yet to be carried out with "the new resources to be assigned (538 million euros)”.

MOSE, whose name is a play on words, both an acronym of the Italian for “Experimental Electromechanical Module” and a reference to Moses who parted The Red Sea, features barriers at each of the three lagoon inlets leading to Venice: Bocca di (meaning “Mouth of”) Lido, Bocca di Malamocco and Bocca di Chioggia. The document in question specifies that all three inlets need one year to complete the civil and maritime works already in place, while for the new interventions, financed with 538 million euros, to be completed, Lido and Chioggia need until 2023. Malamocco, the deepest stretch of water, will require three years, up to the end of 2024.

In addition to the barriers of gates, MOSE also features specialised plants (due to be finished in November 2023) and the “Operational Decision-making Center” at the Arsenale (scheduled completion June 2024).

The longest delay found in the document is the section concerning errors in the design and execution phase, as well as anomalies and malfunctions, such as rust and other forms of erosion. The work that is already underway will not be completed before the twenty-ninth month, approximately in April 2024. The interventions made possible by the new funding will still require four years, which takes the end date to December 2025.