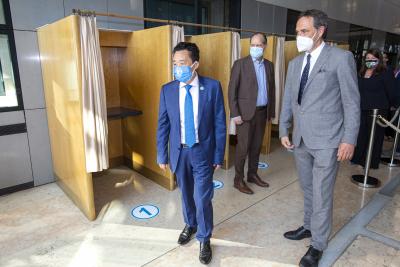 ROME – Dutch influence at the FAO could be set to increase further with speculation that Netherlands wheeler-dealer Ilja Betlem may be promoted to Chinese DG Qu Dong Yu’s cabinet at the director level in the UN agency, FAO sources say.

Betlem, a Dutch citizen of Hungarian descent, took over the P-5 position in the Meetings Management division some two years ago, moving from the Legal Office of the organization. Now the P-5 position has been advertised on the FAO website, fuelling speculation that Betlem’s influential friend Raqesh Muthoo is campaigning to get Bethlem placed in the Cabinet, the sources say.

“In doing so, Muthoo would have major leverage in the Cabinet,” one veteran FAO watcher noted.

The Netherlands’ influence at the FAO already increased earlier this year when a veteran Dutch ambassador became Chair of the FAO Council http://www.italianinsider.it/?q=node/10363.

Muthoo was seen as an outside chance potential candidate for DG in the last election for the post at the FAO though in the end another Indian candidate was forced to stand down when China entered the race, splitting the Asian vote.

Qu sought to exile Muthoo to Thailand as ADG for Asia but the Indian hungercrat evidently preferred to remain close to headquarters and the levers of power, the sources said.

Should India decide to field a candidate again in the next election it could play havoc with Qu’s plans for re-election for a second term, the sources say,