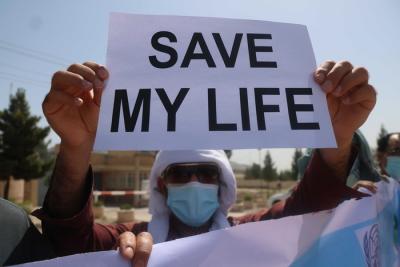 KABUL -- More than 300 former Italian army Afghan interpeters and their families remained blocked 'in limbo' outside the gate of Kabul airport Thursday for a second day as Italian military aircraft reportedly left the facility with only a few dozen people aboard, according to members of the group and airport sources.

One of the former interpreters in the crowd at the gate, where many people have been beatend and whipped by the Taliban to prevent them entering, told the Italian Insider that Italian auhtorities inside the airport only arranged for a handful of former interpreters to get inside, leaving the vast majority outside.
"Our representative, Ali Safdari, was allowed to go inside along with a couple more interpreters after coordinating with Italians who came for them at the gate," the former interpreter, who spoke on condition he not be named, said.
"The rest of us, who are more than 300 people, have been in limbo. Only specific people who have friends among Italians are fortunate enough to find their way inside."
The Times of London quoted airport sources as saying that "flights bound for Germany, Australia, the Netherlands, France and Italy took off with only a few dozen people on board" due to the Taliban preventing people entering the airport and disorgnisation among Western representatives at the facility.
The Italian Defence ministry has not responded to Italian Insider's request for comment.
After more than 24 hours at the gate some of those who had been waiting had to give up.
"We left the gate 10 minutes ago," one former interpreter told the Insider. "I and my family couldn't take it anymore. My wife was starving and my son had a bad diarrhea."
jp
U.N.
Embassy Row
World
Italy