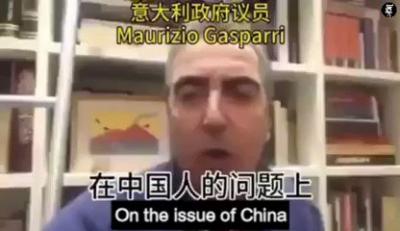 ROME -- The Chinese Embassy in Rome has lambasted the Forza Italia senator Maurizio Gasparri after he lashed out at Beijing in a tweet saying "China is the shame of the world."

"It is good that the medal count of the USA is more than that of China, which spreads virus and pollutes the planet," Gasparri chortled, "China is the shame of the world, it is obligatory to scorn China."

The Chinese Embassy retorted to the outburst with a tweet saying "the calumny against China are an instigation to discrimination and hatred. We firmly condemn them. The respect for another country and its people is the minimum  one can expect from a parliamentarian. Unfortunately he failed miserably."

Gasparri, a former member of the neo-fascist MSI party, is well-known for wild posts on social media.  In 2014, for example, he commented Italy defeating England in World Cup football saying "it is a pleasure to tell English bollocks where to get off."
A few days later he dubbed German Chancellor Angela Merkel "horrendous."
jp
Embassy Row
Italy