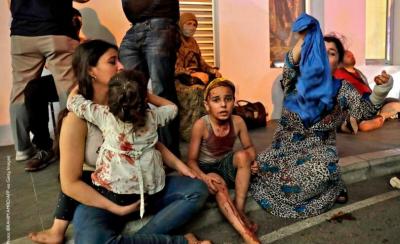 BEIRUT – On Aug. 4 one year ago a human tragedy erupted on an apparently peaceful afternoon in the Lebanese capital. It was 6 p.m. when an enormous explosion killed more than 200 people and injured some 7,000 others as a big area of the city was ripped apart leaving a large part of the inhabitants of Beirut homeless and destitute.

The blast was due to 2750 tons of ammonium nitrate that had been confiscated in 2014 by the Lebanese government from an abandoned freighter, the  M/N Rhosus,  e and stored in the port without security measures.

A tragedy within the tragedy was that the Lebanese state already was in economic crisis exacerbated by the spread of Covid-19, meaning it was unable to organize emergency medical treatment or hospitalization for all those wounded. A humanitarian crisis was added to the already devastated Lebanese situation.

There have been many theories about who or what caused the explosion. Investigations have focused on different fronts, the Lebanese political class has sought to be close to the people, European countries have carried out important aid and support.

Beyond the political, economic and diplomatic aspects that make up the background, what I consider is an emergency is the condition of the Lebanese people, and, even more, thinking about and evaluating the desperate plight of the thousands of children and their families who have suffered this tragedy most dramatically.

One remembers all those lads whose lives were lost under the rubble, without being aware of the world that destroyed them without they being to blame in any way. One thinks of all the mums and dads who can no longer set their eyes on their children and of those children who, being orphans, will never be embraced by their parents again.

I feel pain for all those children obliged to take to the streets to sell petrol on the black market or to gather metal and plastic scrap.

I feel pain for all the children obliged to undergo violence and verbal abuse while trying to earn money for their families living on the streets.

I feel pain for all those children who don’t feel the warmth of a hug, the beauty of an embrace, the joy of a love that flowers.

I experience pain for our inability to protect all the children who live in fragility and the unworthiness of an existence that drowns them in an absolute void.

Sometimes I close my eyes and think of the children of Syria, of Egypt, of Libya, opf Lebanon, also of those in our own Italy. I was also a child myself and I remember that in my village there were situations of need, and, therefore, I know what suffering can be. I find great sadness because I am too small to be able to help them.

But what can be done? One must make proposals and act and guarantee them a future that they can know how to take advantage of; one must help the children and their families through a deeper knowledge of their cases; help them by giving them cash funds in case of emergency; psychosocial and mental health services; being close to them on their tiring journey of life, helping them with orientation, giving them help, food and education.

Urgent action is needed to guarantee Lebanese children and their families economic and financial support, and support that is earmarked for the well being of children. Nobody must harm children. They are the resource for the future.

It is only by starting with this that one can aim to make the whole country be reborn.