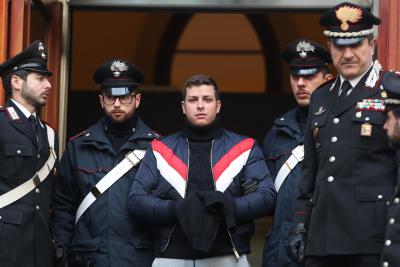 PALERMO - An operation by Palermo's District Antimafia Directorate (DDA), in collaboration with the police and Carabinieri, has brought the arrest of 16 men, for crimes of mafia association and extortion. The investigation has also revealed much about the inner workings of the Greco, Roccella and Brancaccio clans of the Sicilian mafia.

The investigations, lasting two years, revealed that much of Palermo, in particular the Brancaccio-Ciaculli neighbourhood, is still under the control of Cosa Nostra.

"We have identified the leaders of the Brancaccio-Ciaculli clan, one of the most fierce and historic organizations in Palermo," said General Arturo Guarino, Provincial commander of the Carabinieri. "We have identified the leader, his supporters and the extortion activities that they carried out in the city. Relations with the other families of the clan and with foreign organisations, especially in the United States of America, a further blow to Cosa Nostra that emphasizes the will of the Carabinieri to give them no respite."

Among those arrested were Giovanni Di Lisciandro and Stefano Nolano, head of the Roccella family. The two bosses operated a widespread system of extortion, without any resistance from the business owners who never turned to law enforcement. Supermarkets, auto-shops, butchers, bars, clubs, pharmacies, bakeries, construction companies and car dealerships were all targeted amounting to a total of 50 episodes extortion, with no complaints ever being made to the police. Even during the lockdown the few shops that remained open, no matter how small the business, were forced to pay protection money.

Also arrested were Filippo Marcello Tutino and Girolamo Celesia, heads of the Brancaccio clan. Tutino managed relations between the members of the clan and trained affiliates on how to get the most from traders and businessmen.

The operation also revealed that after the January 2019 arrest of Leandro Greco, a descendent of the Greco clan, one of the most powerful in Sicily for much of the 20th century, power passed to his cousin Giuseppe Greco, known as 'The Senator', like his father Salvatore.

Giuseppe dealt with dealings between members of the Brancaccio, Roccella and Corso dei Mille families, advised by the elderly Ignazio Ingrassia. The two organised the purchase and sale of real estate and made agreements with the 'ndrangheta for the purchase of cocaine also from the 'ndrangheta, the biggest importers in Italy.