EGIC conference: ‘Cyprus and the Emerging Security Architecture in the East Mediterranean’ 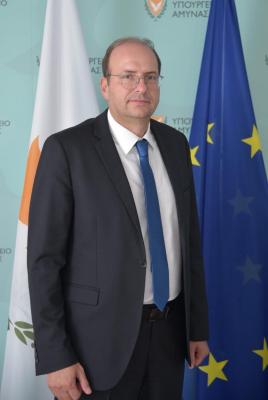 ROME – The new geopolitics of the East Mediterranean and the emergent trilateral partnerships of Cyprus-Greece-Israel and Cyprus-Greece-Egypt means that all Mediterranean regions should be seen as an “interconnected space of interest,” according to Charalambos Petrides, Cyprus’ Minister of Defence.

Petrides explained, at the Euro-Gulf Information Centre (EGIC), that the East Mediterranean used “to be ignored”, yet, thanks to oil and gas, the dynamics have changed. As a result, Mediterranean countries, such as Cyprus, could be at the forefront of European geopolitics. With the new geopolitical reality emerging in the region, as well as in the Gulf, it is important to acknowledge the potential for inter-regional collaboration. Petrides was keen to celebrate the “diplomatic relationship between Cyprus and Italy” whilst saying that “more can be done together.” In recent years, the bilateral economic cooperation has expanded, with the EastMed pipeline.

In terms of security, “Cyprus is a pillar of stability for the East Mediterranean and Gulf area”’ - it is considered a “regional security subset of the East Mediterranean”, although potential political instability could be prompted by its neighbours: Syria, Libya and Lebanon. Geographically, the Eastern Mediterranean is vital in terms of security systems. Cyprus has a “long-standing friendship” with countries both inside and outside the EU, allowing for “strong bilateral connections.” There is a “long-term interest” for enhancing defence cooperation programs with countries like Italy, via joint training, to protect Cyprus from “unlawful activities.” With the flow of migrants and the ever-present fear of terrorism, one must continue to “explore how geopolitics can avoid hybrid activities,” Petrides said. In order for Cyprus to ensure stability, it has to be in the framework of international law, although Cyprus’ maritime and air security is currently “being violated.”

Cyprus plays a crucial role in the region’s ‘security architecture.’ It can be a mediator for Libya and other countries in the area, so it is important to enhance its “bilateral relations with key EU members.” Libya and Turkey are looking to join forces, according to Petrides, forming an "exclusive economic zone" after the GNA maritime deal in 2019. This bilateral relationship could destabilise Cyprus and make it more vulnerable. By investing capital in the Middle-East and Gulf region, socio-economic change could be brought about. With the redeployment of US troops from Afghanistan, there is a “renewed US interest for the whole of Cyprus,” who can work on projects to support trilateral relationships, such as Cyprus-Greece-Egypt. Meanwhile Cyprus is seeking also cooperation with the alliances of NATO, to facilitate EU cooperation. In January of this year, Cyprus formalised defence and military cooperation with the UAE, and it is currently looking at ways to proceed with the cooperation program. As well as this, “new bridges are being built with Saudi Arabia.”

At the moment, Cyprus is “looking to widen navigation and strengthen naval presence in area of East Mediterranean”, by cooperating with Italy, whilst “building a common vision of the threats and challenges that we face.”

Turkey is continuing to pose "many problems", by violating Cyprus’ national airspace. According to minister Petrides, the reports about a new Turkish UAV base would change Cyprus’ status quo and regional security. Turkey have already completed 14 seismic surveys as well as six different drillings, creating “instability for all of the region” and changing the “balance of power by extending power elsewhere.” Turkey is failing to recognise the “law of the sea alliance.” Petrides went on to address Turkey’s “destabilising agenda: not just in the security and defence spheres, but also they have been seen not respecting social and religious aspects.” They also have a direct link with migrants and refugees. “At all levels, Turkey is a threat for Cyprus.”

To contribute towards building an “alliance structure”, the EU should play a  “more active role” in the East Mediterranean area, the minister of defence stated. The EU can help to assist cooperation with Egypt, and Petrides is “concerned by the aggressive approach of the Turks.” Sanctions on Turkey should, by no means, be the target “but maybe it’s the only way,” he commented.