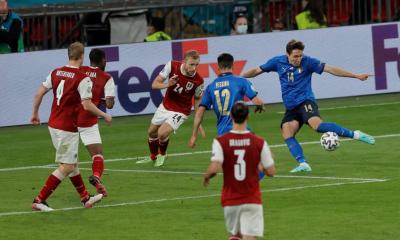 LONDON - Italy are through to the quarter-finals of the Euros 2020 after beating Austria 2-1 at Wembley. The Italian performance was not as flawless as it has been in the competition so far, however, and it took until extra time for the Azzurri, possible tournament favourites, to finally put the game to bed.

Though they managed to buck up their ideas in the thirty minutes of extra time, Italy were sloppy in the second half and were lucky to see Austria’s 65th minute goal ruled out by VAR - Austria’s consolation goal finally coming in the 114th minute to frustrate an Italian side looking for their 11th clean sheet victory in a row.

The first half was a brilliant display of exciting football. Though Italy were maybe not playing as well as they had done in their group stage matches, they were clearly up against much tougher opponents. Italy’s first half was one of patience, passing their way through the Austrian lines to the edge of their box, trying to weave chances out of long build-up play.

One of Italy’s better chances in the first half was a spectacular Ciro Immobile shot from outside the penalty area that seemed to catch both the Austrian defence and goalkeeper off guard, though could only skim the top corner of the woodwork before going behind for a goal kick.

Throughout the first half, Austria dealt very well with Italy’s high press, playing the ball assuredly out from the back, and on a few occasions giving Italy a scare with efficient counter attacking football, including a Marko Arnautovic effort that could’ve shaken Italy had it not been blasted over the crossbar.

Following a first half of engaging, attacking football from both sides, however, came a second half with a bit less to show for itself. Both teams became sluggish and mistakes began to increase, mainly from Italy, whose grip on the game was fading.

Things almost took a very nasty turn for Italy in the 65th minute when Stefan Laimer lofted a cross into the box for David Alaba, the Austrian talisman, to head back across the face of the goal, setting it up for Arnautovic to head past helpless Italian keeper Gianluigi Donnarumma. Austrian jubilation was short-lived however as VAR classed Arnautovic offside, though only after much deliberation.

Still goalless after 90 minutes, the game went to extra time. The short break and team talks seemed to give both sides a huge boost, coming back out to throw everything they had at the match.

Italy finally broke the deadlock in the 95th minute when Leonardo Spinazzola, who was brilliant all match down the left hand side, found the substitute Federico Chiesa in masses of space in the penalty area. He took two brilliant touches with his head and then right foot to dodge the lunge of Konrad Laimer before smashing it into the back of his net with his left.

A few minutes later a brilliant Lorenzo Insigne free kick whipped into the top corner produced an equally brilliant save by Austrian keeper Daniel Bachmann to deny the deserving Insigne.

Italy doubled their lead in the 105th minute when a incisive ball from Insigne found Francesco Acerbi (well out of position) in the Austrian box. He was bundled to the ground by two Austrian defenders but managed to flick it into the path of substitute Matteo Pessina who took a touch and leathered it past the keeper from close range. A spectacular goal followed by an even more spectacular celebration.

Austria did produce their fair share of chances in extra time and were finally rewarded with a goal when Sasa Kalajdzic produced a brave diving header at the front post to flick home a 114th minute corner. This buoyed Austria up and it almost looked like they could devise a comeback, but the final whistle just six minutes later came all too soon (though doubtless not soon enough for the Italians.

Austria’s journey home will be a quiet one, but they cannot be disappointed with their wholehearted performance.

Italy will now prepare to face Belgium, much stiffer opposition, in the quarter finals in Munich on Friday after they beat Portugal 1-0 on Sunday night. 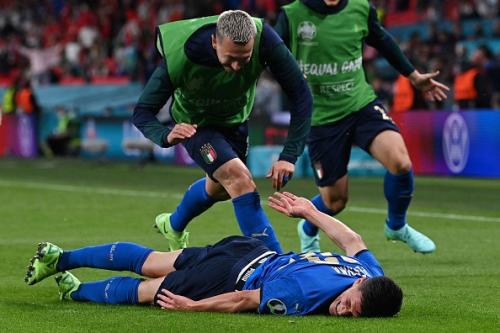