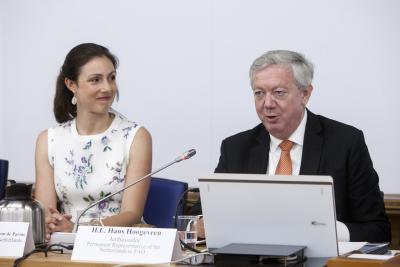 ROME -- The FAO Conference has elected Ambassador Hans Hoogeveen, the Permanent Representative of the Kingdom of the Netherlands to the UN Organizations in Rome, as the new Independent Chairperson of the Council (ICC) for the next two years (2021-2023), FAO officials said.

The FAO Director-General QU Dongyu congratulated Hoogeveen on his election and said he looked forward to ' a constructive and efficient collaboration.' Hoogeveen has worked with FAO in various roles for more than 25 years. He has served as chair of the FAO Programme Committee, Chair of informal consultations on the 10 Elements of Agroecology, Chair of the Committee on Food Security (CFS) working group on food systems and nutrition, and as vice-chair of the FAO Regional Conference for Europe.

The election of the Dutch envoy was a surprise as pundits had tipped a Dominican candidate as favorite for the post.

The outgoing Independent Chairperson of the Council, Khalid Mehboob from Pakistan, said that it had been an honour and privilege to serve in that position for the last four years.

Mehboob has been involved in the work of FAO since 1969. For 40 years (1969 to 2009), he worked for FAO, starting as a junior professional and reaching the level of Assistant Director-General. From 2010 to 2017, Mehboob served as Alternate Permanent Representative of Pakistan to FAO.