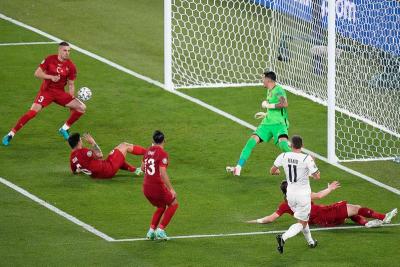 Berardi's cross goes in off Demiral

ROME - The long-awaited 2020 European Championship couldn’t have got off to a better start for Italy after beating Turkey 3-0 in Rome in their opening match. It was a strong start made stronger by the 1-1 draw between Switzerland and Wales, the other two teams in the group which Italy now leads.

Since their failure to qualify for the 2018 World Cup the Azzurri have turned their fortunes around and are currently on a 28 match unbeaten streak, with their victory on Friday being their ninth in a row. Following their performance against Turkey - a team many had suggested could be somewhat of a dark horse - Italy have shown themselves to be real contenders for this tournament. However, in their 28 match unbeaten streak they are yet to come up against any other proper Euro title contenders, apart from their 1-1 draw with Portugal.

A goalless first half, despite Italy’s 14 shots to Turkey’s zero, was marked by brilliant performances by Leonardo Spinazzola and Lorenzo Insigne down the left hand side, and it was Insigne whose corner produced arguably the best chance of the half - a Giorgio Chiellini header superbly saved by Turkish keeper Ugurcan Cakir.

The second half started just as positively for Italy when, just eight minutes in, Domenico Berardi smashed a cross into the box that is turned in off the chest of Turkey’s Merih Demiral who had no time to react.

Italy were now well in their stride and their second came in the 66th minute when a Insigne shot was saved and Ciro Immobile found himself in the right place at the right time to pounce on the rebound and slide it past the keeper.

Insigne finally got his goal in the 79th minute with a neat curling finish at the end of a series of quick passes through four pairs of Italian feet to dissect the Turkish defence.

Though Turkey did not live up to the potential that their abundance of top class players suggested, they did on a few occasions threaten the Italian goal, though nothing that the experienced back line of Bonucci and Chiellini (with a combined age of 70) couldn’t deal with.

It was the first time Italy have scored more than two goals in a Euros match, and a very positive performance that will put them in very good stead going into their next match against Switzerland on Wednesday. 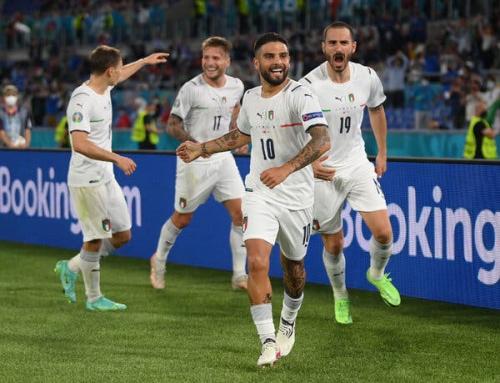