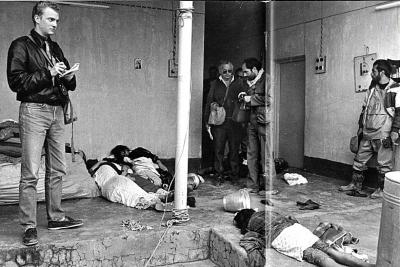 ROME--As a young reporter in Lebanon, Richard Beeston faced down an execution squad and at one point found himself given honorary command of a company of Muslim militiamen. He gave Terry Waite pause for thought by claiming that hungry journalists were planning to eat the Anglican emissary.

In later years as the Times foreign editor, before his untimely death from cancer at age 50 on Sunday, Beeston, the bravest foreign correspondent of his generation, modestly stopped short of recording some of the more dramatic events during his time based in Beirut during the Lebanese civil war in the mid 1980s. They are remembered vividly, however, by those who were privileged to work with him.

Returning one day to the Lebanese capital by car from the warfront in the south of the country, Beeston and an American reporter were stopped by unidentified gunmen, accused of being spies and taken into a room in a nearby house spattered with blood where they were ordered to lie on the floor. The American colleague went on his knees and tearfully begged for his life to be spared. However Beeston stood his ground and refused to lie down, knowing it is easier to shoot a man spread eagled on a floor. “What d’you mean? I am not lying on the ground,” he angrily told the gunmen’s chief.

Eventually after a battle of wills the killers, perhaps deciding Beeston was someone important, reluctantly let the two men go.

Beeston lived in an apartment close to the Green Line front between the mainly Muslim and Christian controlled areas of Beirut. His neighbours were Peter Smerdon from United Press International and Enriquez, a resourceful correspondent for the Spanish news agency EFE. Entertainment consisted of inviting dinner guests to watch videos of war movies like Apocalypse Now, which often would be accompanied by realistic sound effects from the fighting outside.

Many reporters fantasise about raising their own private army. During an impromptu party, for instance, the veteran Lebanon watcher Robert Fisk reeled onto his apartment balcony on the Corniche during a gun battle between militiamen in shore positions and Israeli gunboats, shouting “these are my men, they’ve put on this show for my birthday.”

Richard, however, decided it might be useful when a local commander of the pro-British Druze PSP militia jokingly offered him honourary command of his men while he was away from Beirut visiting his political masters in the Chouf mountains. Beeston subsequently recalled how he deployed the fighters to come to the rescue of a UPI reporter being evicted from her flat by thugs from the fringes of the Amal Shiite militia and then suggested that militiamen might carry out similar “peace-keeping” tasks in support of Western and other civilians in subsequent days. “It was great fun throwing them into action where the bad guys were causing trouble,” he told me.

The episode recalled scenes from James Buchan’s novel set partly in Beirut, A Parish of Rich Women, in which a British journalist throws his lot in with Palestinian fighters during the Israeli siege of the capital.

The risk of kidnapping was a constant anxiety for reporters working in West Beirut at the end of the civil war. When I reported for UPI in Beirut it was always reassuring to meet Richard walking nonchalantly around Hamra between militia checkpoints, a tall, blonde Englishman in his early 20s who was conspicuous on the mean streets.

Sorties to journalists’ haunts such as the Spaghetteria restaurant on the Corniche or the Back Street night club would inevitably end with Richard chivalrously ensuring that women reporters working in Beirut got home safely, driving at considerable speed in his Volkswagen golf as gunfire rattled around shelled-out buildings and snipers began their deadly night’s work.

Richard, known for his wicked sense of humour, was among a number of reporters following Terry Waite when he was trapped in the Commodore Hotel by heavy fighting and the hotel’s food supplies began to run out. “Mr Waite, we’ve decided that since you’re the biggest man here we are going to cut you up and eat you,” Richard told the envoy, enjoying the look of confusion before the negotiator realised he was having his leg pulled.