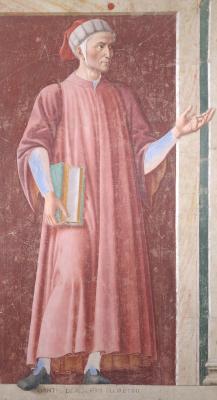 FLORENCE – The portrait of Dante by the Tuscan Renaissance artist Andrea del Castagno, held at the Uffizi Gallery, has been restored by the Opificio delle Pietre Dure in Florence.

The fresco, arguably one of the best know depictions of Dante, shows a serene image of the poet, different to how he had usually been presented.

The gradual deposit of sediment on the surface of the work had obscured and weighed down the colours, making it seem more like an oil painting, aging both the painting and the poet. The restoration has given back meaning to the word ‘fresco’.

The work was carried out by experts of the workshop in Florence, using advanced scientific research to analyse the fresco and return it to its former glory without causing further damage, using electromagnetic photography of various wave lengths, and optical scanners from the National Institute of Optics at the National Council of Research.

Restoration took six months and was directed by Cecilia Frosinini and carried out by Sara Penoni and Cristiana Todaro.

It will be one of the principal works on display at the upcoming show ‘Dante – The Vision of Art’, in Forlì at the Fondazione Cassa dei Risparmi, marking 700 years since the death of the poet.

Eike Schmidt, Director of the Uffizi Gallery, said of the work, “it is an icon linked to Italian culture, the most famous image of Dante.”