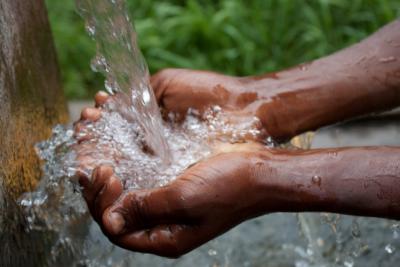 NAPLES - Water is life. From the first page of the Holy Scripture, water is the element in which the Holy Spirit dwells. It is the life giving reality that makes the existence of all things possible.

This assumption is contained also in a philosophical truth. Going back to Talete, in fact, water is that which is at the bottom of all things, and constitutes the foundation of all things; it is the Beginning.

Representing water as a common and essential good, I would not hesitate to say that access to this good and its availability are genuine rights and, in this sense, the multiple questions surrounding water are at the middle of the wider paradigm of justice, infiltrating a field which has at its core the private: the merely mercantile concept cannot prevail until the privatisation of water. The public value of water limits the speculation that would make it difficult to access for everyone. Water is a collective good with a universal destination.

Water, a common good and everyone’s right, has appears forever as an unlimited and inexhaustible resource, accessible and available, always and for everyone. But is this always true?

Already for some time we have been involved in a real war for water that, I believe, hides a much tougher, deep-rooted conflict: the war between different cultures and peoples. Rich and developed populations, as for example those in the west, against poor and breathless people. This opposition, that sees at its centre an ever wider disparity between the supply and demand of systems of delivery and distribution infrastructure.

It is by now clear to everyone that economic development opens more and more doors to itself, with an inevitable increase not only on the question of water, but in general on the impact of resources: how much pollution we produce, how much soil we occupy, how much we deforest. Humankind makes ever more interventions on the natural environment, with the false intent of adapting the environment to our own interests, causing complex outcomes which are to some extent profoundly negative if measured in relation to the environmental modifications that will gradually begin to fight back against man. The action of man, of which he himself is purely responsible, and that at certain times manifests itself in cruelty, makes us forget that he should be the custodian of this precious world. Water is an asset and as such it should be preserved and protected, also in regard to the next generation. We should remember that Pope Francis dedicated an encyclical, “Laudato Is” (Praise Be You), on the care of creation, making clear reference to the importance of water and the necessity to invert the tendency that is taking us on our way to a great water war. Everyone has the right to clean and safe water, and even those countries whose legislation doesn’t include that water is a human right must attribute to it the importance that it deserves.

I am convinced that social policies must put defence of the right to water at the centre of their government actions, and specifically, we need to commit ourselves on a political and legal level so that the use is guaranteed of a resource on which depends the population’s survival and the future of humanity. I said before that water is even a moral problem, and it is so in the extent to which it becomes an object of conscience: it is a moral duty for the generations to come to educate everyone in terms of the care for water.

Taking care of water means, according to my vision, creating a culture of discussion. To build bridges and dialogue between all countries, to use governments, politicians, businessmen and scientists to bring together their skills towards a shared objective, that of having water as a right and the duty to respect it, and to know how to live together on the Earth, in countries of men of every culture, and colour.

“If we gave water to the poor, the world would be less poor.”