Mattarella calls for unity on anniversary of Italian unification 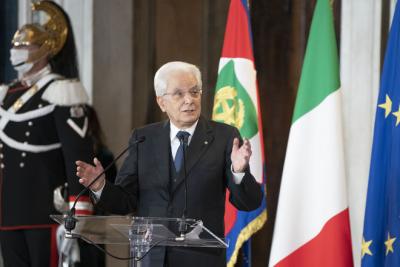 ROME - On the 160th anniversary of the unification of Italy and the proclamation of the Kingdom of Italy, President Sergio Mattarella addressed the country, saying that Italy is a country capable of “rising up from adversity.”

“Italy, hit hard by this crisis, has shown once again the spirit of democracy, unity and cohesion. In the distancing imposed by the pandemic containment measures we have found ourselves closer than ever and aware of belonging to a community capable of rising up from adversity and of renewing itself.”

Addressing the historic occasion of the anniversary of the proclamation of the country, flag and anthem, he continued, “the Republic, by choice of Italians, is the greatest expression of national unity, and the anthem and the flag are the fondest and best recognised symbols of our country. Today’s celebration again invites us to a common commitment, in the grand scheme of the European project, to build a country more united and solid, necessary conditions for renewed prosperity and equal and sustainable development.

“The coronation of the dream of the ‘risorgimento’ has bound the identity of a nation, that takes its origins from our ancient history and culture. The generations that have preceded us, together overcoming the most difficult times, have given us a free, prosperous and united country.

“I extend respect, thoughts and homage to all those who have contributed to building our country.”