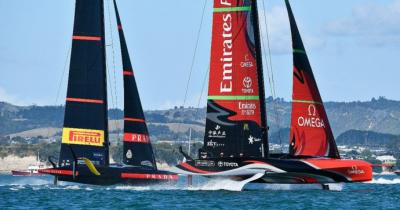 AUCKLAND - Team New Zealand have beaten the Italian yacht Luna Rossa to win the America's Cup, the oldest international sporting trophy in the world, for the second time in a row. The Kiwis won the final race on Wednesday to end the best of 13 race series 7-3.

After six races the scores were tied at 3-3, and there was accusations that the finals were getting boring as the winning team for these six matches was always which ever team led from the start. However, the next four matches, all won by the home yacht Te Rehutai, were far from boring as the winds began to shift and the boats could reach top speeds of around 60mph - with the hulls of the boat barely touching the water, supported by the foils poking out of the water.

Team New Zealand proved themselves worthy winners in the final race on the Hauraki Gulf, winning by 46 seconds. Prematch predictions seemed to come true - that the Kiwis had the faster yacht, while the Italian syndicate had designed their's more for stability and manoeuvrability.

This was Royal New Zealand Yacht Squadron's fourth America's Cup victory, their second also coming against Luna Rossa in 2000, while this is only the third time the Circolo della Vela Sicilila yacht club have qualified for the tournament.

2021's America's Cup was one plagued, like all things, by the coronavirus pandemic, with races being delayed and a much limited crowd on the shore cheering the teams on. However, there were still nealry 1,000 spectator boats in the harbour, and more crowds than would have been allowed in any other Covid-struck country.

"We’ve had messages from everyone from the Prime Minister to high school kids," said helmsman Peter Burling. "We’re just blown away by being able to achieve what we have as a group and win another America’s Cup."

“I think we proved to the world that we can do it," said Luna Rossa helmsan Francesco Bruni. "It’s been hard luck the last couple of days but definitely we’ve done a fantastic job as a team.”