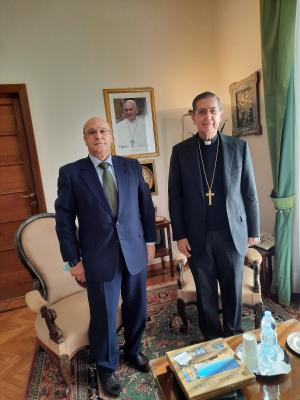 ROME - The Algerian Ambassador to Rome, Ahmed Boutache, was received this Thursday by Cardinal Miguel Angel Ayuso Guixot, President of the Pontifical Council for Interreligious Dialogue and one of Pope Francis' very close advisers. A meeting which is in itself an exceptional and very special attention which was reserved for the Algerian representative testifying, we are told in Rome, of the great respect that the Holy See has for this country and a pronounced sympathy that nourishes the sovereign pontiff vis-à-vis the Algerian people.

On the menu of this meeting scheduled for the return of the Spanish cardinal, who accompanied the Pope in Iraq, were a number of themes and questions which are at the center of the action of the two diplomacies, evoking with his host, among others, the current marked context: the economic and social consequences of the Covid-19 pandemic, the importance of a continuous mobilization of the international community in favor of peace, tolerance, inclusion, understanding and solidarity and role of the great universal religions in the establishment of a better and more just world.

Bishop Ayuso Guixot, as a sincere and indefatigable missionary of Islamic-Christian dialogue, emphasized the sincerity of the intentions of Pope Francis, in his outstretched hand to Muslims, for a dialogue that wants to be a path of truth, that deserves to be ''be patiently undertaken to transform intentions into actions."

He then addressed the role of education in promoting the values ​​of dialogue, understanding and cooperation between religions and cultures to better combat all these hate speeches conveying exclusion, extremism, withdrawal on oneself, xenophobia and discrimination in all its forms.

He has in this effect welcomed the first results of the joint declaration between Pope Francis and the Grand Imam of Al-Azhar, Ahmed Al-Tayeb, which was launched to act as a bulwark against the logic of the confrontation that some want between the two worlds.

For his part, Ambassador Ahmed Boutache wished to recall the foundations of Algeria's positions on interreligious dialogue, based on the values ​​of peace, reconciliation, tolerance, inclusion, understanding and peaceful and harmonious coexistence.

Likewise, he paid tribute to Pope Francis, who has not ceased in recent years to denounce the amalgamations and Islamophobic campaigns that target the Muslim religion against a background of stereotypes and prejudices, poorly hiding extremist postures at the antipodes of the values ​​of humanity.

Addressing the underlying causes of conflicts in Africa and the Arab world, fueled here and there, against the backdrop of geopolitical and strategic issues aimed at exploiting the natural resources of these countries, the Algerian ambassador stressed that Algerian diplomacy has always favored the search for a peaceful settlement to crises and conflicts through inclusive dialogue and reconciliation between children of the same country.

And finally to discuss with Bishop Ayuso Guixot the relevance of the African Union initiative "Silencing the guns in Africa", highlighting the responsibility of various groups that fuel conflicts, with the objective of maintaining these countries under pressure in order to preserve their stranglehold on their natural resources. A posture at the heart of the pope's recent speech in Baghdad.

Finally, at the end of this meeting, the two men underlined the interest and the importance of preserving this momentum of understanding and dialogue between our country and the Holy See and by accompanying the Algerian ambassador in good humour. In perfect Arabic, Mgr Ayuso Guixot finished with these few words about the Algerians: "Ba'ligh salâmi li'chaâb al-djazaïri al-karîm!"