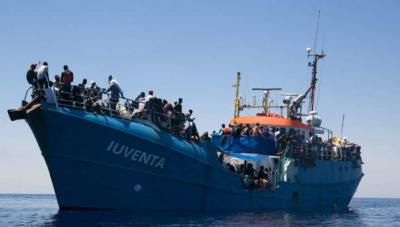 TRAPANI - Four migrant rights defenders from the 'Iuventa' search and rescue ship have been charged by prosecutors in Sicily for "aiding and abetting illegal immigration to Italy".

On March 2, the Trapani Prosecutor Office brought these charges against a total of 21 individuals and three organisations, including Save the Children and Médecins sans Frontières (MSF). If convicted, the charges carry a possible sentence of 5-20 years imprisonment and a fine of 15,000 euros per person that was rescued during the search and rescue operations.

The 'Iuventa' first began conducting search and rescue operations in the central Mediterranean in July 2016 and has since saved more than an estimated 14,000 lives, with the support of over 200 volunteers at sea, according to 'Front Line Defenders.'

The charges were brought against the rescue boats following a three year investigation into search and rescue missions that occurred in 2016 and 2017. Besides the 'Iuventa', at least two other rescue boats are facing the same charges: 'Vos Hestia', operated by the humanitarian organisation Save the Children; and 'Vos Prudence', run by MSF.

On June 20, 2018, the Trapani Public Prosecutor’s Office notified ten of the 'Iuventa' crew members of the ongoing investigation into the accusations against them.

The Italian authorities initially seized the 'Iuventa' on Aug. 2, 2017 and opened an investigation into its crew, including its captain and migrant rights defender Pia Klemp. The charges relate to three different rescue operations: the first on the 10 September 2016, and the second and third both occurring on 18 June 2017. The accusations that the boat and its crew had been complicit in smuggling were made after several search and rescue NGOs refused to sign a ‘code of conduct’ as they believed it would substantially limit their ability to carry out their search and rescue operations.

In its research project Forensic Oceanography, the Forensic Architecture research agency at Goldsmiths, University of London investigating human rights violations, conducted an investigation into the three search and rescue operations. It concluded that the 'Iuventa' crew did not return empty boats to smugglers, as they were accused of having done. Nor do they appear to communicate with anyone potentially connected with smuggling networks, as the Italian authorities suggested they had.

Concerns regarding the situation of migrant rights defenders in Italy and criminal investigations against NGO ships involved in search and rescue operations in the Mediterranean were also expressed by the EU Agency for Fundamental Rights, and UN experts on numerous occasions, particularly in recent months.

'Front Line Defenders' have called on the Italian authorities to immediately drop all charges against the migrant rights defenders.