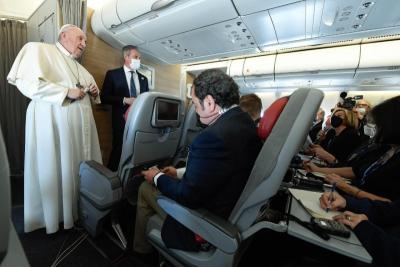 VATICAN CITY - In his first general audience since returning from Iraq, Pope Francis spoke about the damage he saw caused by extremism in the country, and the affect on the Christian population.

"The ISIS occupation caused thousands and thousands of inhabitants to flee, among them many Christians of a variety of confessions and other persecuted minorities, especially the Yazidi. The ancient identity of these cities has been ruined. Now they are trying hard to rebuild. The Muslims are inviting the Christians to return and together they are restoring churches and mosques. And, please, let us continue to pray for these, our sorely tried brothers and sisters, so they might have the strength to start over."

He concluded, "in Iraq, despite the roar of destruction and weapons, the palm, a symbol of the country and of its hope, has continued to grow and bear fruit."

As the pontiff flew back from his historic visit to Iraq on Monday, he addressed the question of a future trip to the Lebanon in a mid-air press conference on the papal flight back to Rome.

He said that "Cardinal Raï [the Patriarch of Antioch] asked me, during this trip, to make a stop in Beirut, but it seemed to me to be too little. A mere crumb to the problem, to a country that suffers as the Lebanon does. I wrote him a letter, and promised to make a trip. The Lebanon at this moment is in crisis, but it is in a crisis - I don't wish to offend - of life." The pontiff also mentioned feeling "imprisoned" during his time in lockdown, not being able to make any trips abroad.

During the flight on Monday the pope responded to questions on his meetings during the trip and plans for the future, as well as the position of women in Iraq, it being international women’s day.

In response to a question about the risks a Muslim woman faces if she wishes to marry a Christian, the pontiff said, “women are more courageous than men, this is true, I feel it to be so. But still today women are humiliated… Women are still slaves and we must fight, fight, for the dignity of women…. But not to distance ourselves, we must also think about the centre of Rome, about the girls that are kidnapped and exploited.”

During this trip the pope met with Ayatollah Sistani, the spiritual leader of Iraqi Shia Muslims. The pope was questioned on Monday on the likelihood of a similar document to the ‘Declaration on Brotherhood’ signed in 2019 with the Grand Imam of al-Azhar, considered the leader of Sunni Muslims. The pontiff said of the meeting with al-Sistani, “it was, I would say - it is a bit presumptuous, take this as a presumption - a first step towards that which you ask. We can say that [a similar document written with al-Sistani] would be the second. And there will be others. The path of brotherhood is important.”

The pope also visited during the trip the site of many bombed churches and mosques in Mosul. He said, “when I stopped in front of this destroyed church, I had no words. It’s hard to believe… Not only that church but also the other churches, even a mosque destroyed… Our human cruelty is hard to believe.”

The pope added during the conference that, “I confess this trip has tired me out much more than any other. My 84 years are taking their toll,” though he said that he didn’t know if his papal trips will slow down any time soon, particularly with the mention of a future trip to the Lebanon. 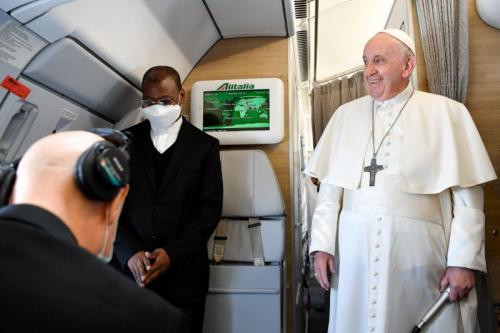