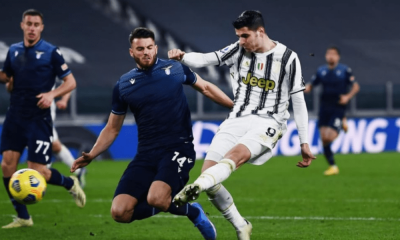 ROME - After another packed weekend of Serie A action, Roma climb above Atalanta to fourth after a 1-0 win over Genoa, and Lazio’s 3-1 defeat to Juventus saw them slip further behind the top six. On Monday night Inter beat Atalanta 1-0 to stretch their lead at the top of the table.

On Saturday night, Lazio took the lead after just 14 minutes when Joan Correa capitalised on a silly back pass from Juve’s Dejan Kulusevski. However, Lazio equalised in the 39th minute with a wonderful goal from Adrien Rabiot, assisted by Alvaro Morata. The Spaniard then managed to score two himself in the second half, the first a neat finish from a counter attack, and three minutes later a coolly converted penalty won by Aaron Ramsey. Juventus are now just four points behind second place AC Milan, and still with a game in hand. Lazio are faring less well, having lost four of their last five matches.

Roma’s 1-0 victory on Sunday was decided in the 24th minute with a headed goal from defender Gianluca Mancini from Lorenzo Pellegrini’s corner. The result took them just one point above Atalanta who drop to fourth after their loss to Inter.

Monday night's match in Milan was a closely fought thing, with Atalanta dominating for periods of the match, however Inter managed to get the decisive goal in the 54th minute. Slovakia's Milan Skriniar fired the ball into the back of the net after a messy scramble in the area set up by a dangerous corner.

Meanwhile Inter's neighours' 2-0 victory on Sunday at Verona has kept them snapping at the heels of Inter, just three points behind. The Bosnian Rade Krunic opened the scoring for Milan with a brilliant curling freekick in the 27th minute, and the Portuguese Diogo Dalot doubled the visitors’ lead in the 50th minute with a crafty dummy and finish.

Milan only used one of their five available substitutes, with manager Stefano Pioli perhaps wanting to rest first team players - several of whom are injured - for their Europa League match against Manchester United on Thursday.

Elsewhere on Sunday, Napoli beat Bologna 3-1 to solidify their position in sixth, ahead of Lazio. Two goals from Lorenzo Insigne and one from Victor Osimhen guaranteed the victory for the home side, with Roberto Soriano scoring Bologna’s only goal.