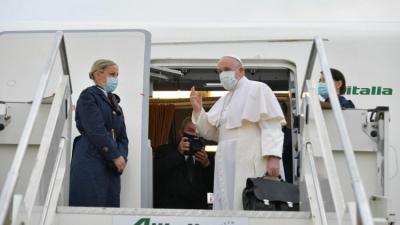 ROME - Pope Francis’ 33th international visit began on Friday when at 7:35 a.m. he departed Fiumicino airport for Iraq. He is due to arrive in Baghdad at midday (2:00 p.m. Baghdad time).

Just before leaving his apartments in the Casa Santa Marta, the pontiff met with 12 Iraqi refugees from the Community of Sant’Egidio and the ‘Auxilium' social cooperative.

Before departing the pope also sent a message to Italian President Sergio Mattarella. “In the moment in which I leave Rome for Iraq, a pilgrim of peace and fraternity between peoples, I am pleased to extend to you, the honourable President, my warmest greetings, which I accompany with my sincere wishes for serenity and prosperity for the Italian people.”

Before the pope set off, ‘Vatican News’ also reports that a small Shia military group in Iraq declared a temporary ceasefire to coincide with his visit. The Guardians of Blood Brigade, who claimed a recent rocket attack on a US-led coalition airbase in Erbil, said is a statement they would "suspend every form of military operation during the visit of the Pope, in respect of Imam al-Sistani and in the name of Arabic hospitality.”