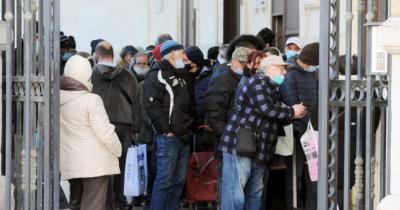 ROME - ISTAT, the national institute of statistics, has reported a massive jump in poverty in Italy in 2020, with around one million more people landing in absolute poverty, according to Il Fatto Quotidiano.

The total, a 15 year record high, now stands at 5.6 million people, or 9.5% of the population, a number which includes 1.3 million minors. The North of Italy saw the biggest increase, accounting for 720,000 of these ‘new poor’.

Absolute poverty is defined by ISTAT as an income level below that of a “basket of goods and services considered essential, and which allows for a dignified life”. Therefore the thresholds are differentiated by location, size of municipality and household composition, among other factors.

For example, a couple with two young children who live in suburbs in the North are counted as poor if they are earning less than 1,610 euros a month, while for the same family living in a small village in the south, the number is 1,222 euros a month.

The huge increase is in part due to a record collapse in consumption, -9.1 per cent, due to the Covid-19 pandemic. Average monthly household spending returned to the level of 2000, 2,328 euros, and the cost of all other goods and services fell by a shocking 19.2 per cent. Only food and housing costs remained stable.

The citizenship income and emergency income, introduced in May, ensured the increase wasn’t a drastic as it would have been otherwise, given the state of the nation. However, the citizenship income is much less favourable towards those living in the North, those with more children and non-EU citizens who have been resident in Italy for less than 10 years. This is because, though the criteria to access these benefits are the same throughout the country, the poverty thresholds are differentiated by area.

The citizenship income and emergency income in general only limited the intensity by which the pandemic affected people financially, not the number of people affected.

This increase in poverty ended a four year streak of decreasing numbers.