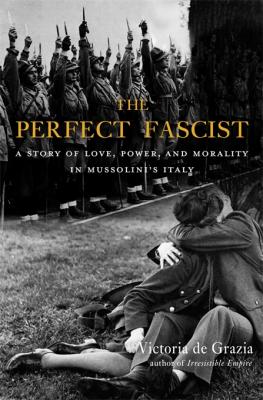 THE PERFECT FASCIST: A Story of Love, Power and Morality in Mussolini's Italy

Attilio Teruzzi, once ranked fourth in Mussolini's regime, is the subject of this detailed study by Victoria de Grazia, who teaches history at Columbia University. Whereas some other Fascists debated whether it should imitate the Russian Revolution or continue Italy's Risorgimento, Teruzzi's Fascism was loyalty to Mussolini, right up to the last-ditch Republic of Salo.

He was more innovative in his relations with women. He married an emerging American opera singer, Lilliana Weiman who, however, did not succeed in halting his womanising. He surprised everyone, after finding that his wife had been briefly unfaithful to him in the past, by seeking an annulment from the Catholic Church. The case was complicated as his wife was from a wealthy American Jewish family but annulment was granted just before anti-Jewish laws were introduced in 1938.

He took up with another woman, Yvette Blank, again Jewish and had a daughter by her. They married. Bruck later made a career for herself in the United States but Teruzzi remained attached to his daughter. It is an odd personal story but the Jewish wives did not worry the regime until the introduction of racial laws in 1938.

Terluzzi, a soldier who was decorated for valour in the first world war, commanded the Fascist Black Shirts militia before being made governor of Cyrenaica.

He aimed to make the Italian colony superior to Britain's and rebuilt Benghazi. Regime journalists gave him a reputation as a good ruler although, it seems, he got his hands on half the native women. De Grazia brings out how important for Fascism was its African involvement.

When the African empire suffered military setbacks, criticism of Teruzzi began for extravagant spending and brutality as well as his womanising.

He was imprisoned when the Allies arrived and condemned for 30 years but released after five. He died in 1950.

Some of the original Fascists took a long time to react against it but at least had misgivings as it became more totalitarian, racist and belligerent. Teruzzi seemed exempt from such reflection. De Grazia claims he was a significant type of figure in the composition of Fascism but to me it seems he shows that Fascism had limited success in creating the New Fascist Man. Teruzzi seems awfully like the unlamented, loyal womanising soldiers evident before the advent of Fascism.