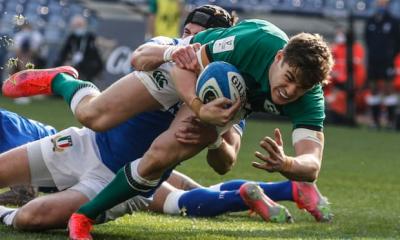 ROME - Italy have now stretched their run of defeats in the Six Nations Championship to 30 matches after losing to Ireland 48-10.

In Rome on Saturday afternoon, the visiting team played their best rugby of the tournament so far, showing signs of the critical attacking team they can be, something that was missing in their previous two matches against Wales and France.

Italy took an early lead with a penalty converted by Paolo Garbisi in the third minute, but Ireland pretty immediately stepped up and piled on 27 points in half an hour.

Ireland’s first try came when Garry Ringrose broke through the Italian defence five metres from the try line. Ringrose was again crucial in the second try when his offload set up Hugo Keenan, running an excellent line, to skip past Italian tacklers and score. Will Connors added another not long after from a well worked passage of attacking play.

Johan Meyer managed to get one back for Italy right at the end of the first half, set up by an excellent dummy and offload by Garbisi, to perhaps give them a glimmer of hope going into the second half, but three more Irish tries, from Connors, CJ Stander and Keith Earls, as well as flawless kicking from Jonathan Sexton (all six conversions and two penalties) secured the victory for Ireland.

Connors’ second try, in the 65th minute, was perhaps helped by the fact that Italy were at that point down to 13 men, with Giosue Zilocchi and Luca Bigi’s sin-binnings overlapping for four minutes.

The match could have been a much more brutal defeat had Ireland not had two additional tries ruled out by the TMO, one for allegedly not having control in the grounding and one for a forward pass.

This victory for Ireland put them into third place in the standings after England lost 40-24 to Wales in Cardiff.

The first hour of this match was a well-contested affair, with Wales scoring three tries (Josh Adams, Liam Williams and Keiran Hardy) to England’s two (Anthony Watson and Ben Youngs), but both teams looking showing signs of class and, if anything, England looking like a more organised attacking threat.

After 62 minutes the match was tied at 24-24, but England then seemed to lose concentration. The reigning champions gave away three unnecessary penalties in eight minutes, all of which were converted by Callum Sheedy, that took the game away from England, and a Cory Hill try in the 79th minute added insult to injury.

The referee, Pascal Gaüzère, received much criticism after the match, most notably for allowing a Welsh try that many thought was set up by an accidental knock on. There were also many English complaints about the two Welsh tries that came from free kicks taken quickly, though the ref made it clear that this is very much allowed. English fans would perhaps say they weren’t given time to set up, though one could also say they were simply caught napping as quickly taken free kicks are a common occurrence and all teams are taught to prepare for them.

France, who are currently looking like the team to contend the title with Wales, and Scotland are still to play after their Sunday clash was postponed due to an outbreak of Covid-19 in the French squad. 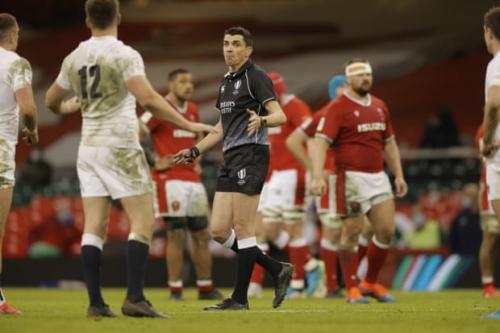