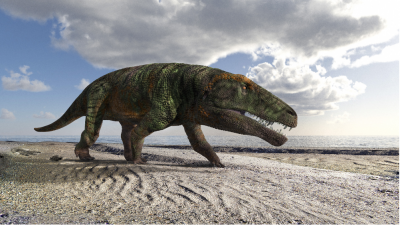 ROME -- Scientists from Italy and Switzerland have found fossilised footprints belonging to a prehistoric reptile resembling a giant crocodile that lived in what are now the western Alps some 250 million years ago.

The well-preserved prints were found on the Gardetta Plateau in the Upper Maira Valley of northwest Italy at an altitude of 2,200 metres. They were first spotted by researchers from the universities of Genoa and Zurich in 2008 and 2009.

The palaeontologists, joined by experts from Rome's Sapienza University and the University of Turin, have now concluded that they belonged to a previously unknown species of carnivorous reptile they have named Isochirotherium gardettensis.

The prints, measuring more than 30 cm, were deposited in muddy tidal sand near a river delta and are believed to have belonged to a creature at least 4 metres long. The animals wandered the then coastal area a few million years after the Permian-Triassic mass extinction, which destroyed more than 90 per cent of the earth's life forms.

"It was an emotional experience to notice two dips pressed into the rock, remove a tuft of grass and immediately realise it was a footprint measuring more than 30 cm," said Edoardo Martinetto, a researcher from Turin University's earth sciences department, who found additional tracks in the same area three years ago.

"It was a real leap into deep time that gave me the privilege of being the first to place my hand in a cavity that had been touched by only one other in hundreds of millions of years," Dr Martinetto said. In the interval what had been soft mud at sea level had become part of the solid structure of the Alps, he added.

The discovery has revolutionised the understanding of a time and place that had hitherto been considered incapable of supporting life.

"The tracks are exceptionally well preserved and of such a peculiar shape that they have enabled us to define a new species that we decided to dedicate to the Gardetta Plateau," said Fabio Massimo Petti, an expert in fossil prints from the Trento Science Museum.