‘Pompeii of the Orient’ discovered by Italians 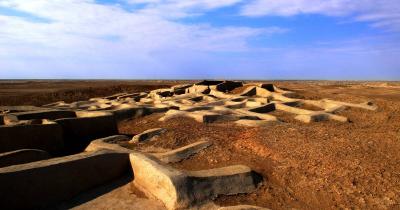 Lecce - During an international online conference organised by the University of Salento, the latest results of the “Mission’s” investigations at Shahr-i Sokhta, an archaeological eldorado located in the eastern Iranian province of Sistan-va-Baluchistan inscribed on the UNESCO World Heritage list, considered the "Pompeii of the East", were presented. Since 2016, the site has been the subject of research and excavation work by an international mission in which the Department of Cultural Heritage of the University of Salento is participating, with the activities of the Laboratories of "Ancient Topography and Photogrammetry", "Physical Anthropology", "Paleobotany and Paleoecology" and "Archaeozoology".

In the presence of the UniSalento Rector Fabio Pollice, the Italian Ambassador to the Islamic Republic of Iran Giuseppe Perrone, the Ambassador of the Islamic Republic of Iran to Italy Hamid Bayat, the Director of the Iranian Cultural Institute Taghi Amini, the Director of the University of Salento's "Dinu Adamesteanu" School of Specialisation in Archaeological Heritage Gianluca Tagliamonte and the Director of the UniSalento Department of Cultural Heritage Raffaele Casciaro, the research results collected in the volume "Excavations and research at Shahr-i Sokhta" (Studies and publications Institute, Pishin Pajouh, Tehran), edited by MAIPS project director Enrico Ascalone of the University of Göttingen and Seyyed Mansur Seyyed Sajjadi of the Iranian Center for Archaeological Research, director of the archaeological project at Shahr-i Sokhta and Dahan-ye Qolaman since 1997, were presented.

The research activities of the Laboratories of the Department of Cultural Heritage of the University of Salento were illustrated by the respective Directors: Giuseppe Ceraudo (Ancient Topography and Photogrammetry), Pier Francesco Fabbri (Physical Anthropology), Girolamo Fiorentino (Paleobotany and Paleoecology) and Claudia Minniti (Archaeozoology).

"International cooperation is fundamental for the enhancement of tangible and intangible cultural heritage," stressed the Rector of the University of Salento Fabio Pollice, "and it becomes even more so when this heritage is recognised as the legacy of the entire human race. Hence our commitment in the Islamic Republic of Iran, aimed at restoring to that country and to the whole of mankind the history of an area that was the cradle of one of the greatest civilisations of the past".

The site of Shahr-i Sokhta, which lies between the Lut desert and the heights of Baluchistan, is one of the most sought-after centres for archaeological investigation, both because it is perfectly preserved due to saline concretions present over the entire surface that have sealed underground artefacts and structures, and because archaeological literature often associates it with the mythological Aratta, which Mesopotamian texts refer to as "where the sun rises", and which rivalled the sovereigns of the Uruk 1st Dynasty (including Gilgamesh), the masters of Sumer and custodians of kingship after the Flood. It was precisely the Flood that put an end to a series of dynasties of unreal longevity to allow kingship to "descend from the sky", first in the city of Kish and then in Uruk. The Sumerian Flood, whose stories inspired the writers of the biblical account, is therefore understood as an element of separation between a mythical time and a historical time; a time, the post-Diluvian one, in which history is made by kings, which the archaeological investigation has partly recognised, and by cities, which the project is investigating.

In particular, Aratta, mentioned in the major Sumerian poems (including "Enmerkar and the Lord of Aratta", "Enmerkar and Ensuhkeshdanna", "Lugalbanda and the bird Anzu", and in Gilgamesh's own poem), is presented as a place far away and difficult to reach, fabulously rich, full of gold, silver, lapis lazuli and numerous other precious materials. The city is also presented as the seat of the goddess Inanna, to whom a temple completely built of lapis lazuli was dedicated; the vicissitudes of the city are also presented as a place of great wealth.

The city is also presented as the seat of the goddess Inanna, to whom a temple completely built of lapis lazuli was dedicated; the city's vicissitudes with Sumerian kings led the goddess to choose Uruk, the centre of southern Mesopotamia, as her residence, handing over kingship to Sumer and to the dynasty founded by Enmerkar and continued with Lugalbanda and the mythological Gilgamesh. The memory of the city will remain alive in Mesopotamian literature to the extent that it is mentioned in the poems of Shulgi, king of Ur, and in other Palaeo-Babylonian texts roughly dated to the 19th century BC.

While waiting for confirmation of the site's identification, the discoveries made over the last 23 years by Mansur Sajjadi's Iranian mission and Enrico Ascalone's new project in the so-called 'Pompeii of the East' have confirmed the exceptional nature of Shahr-i Sokhta, which, although it is the repository of an autonomous path of growth, stands between the four great river civilisations (Oxus, Indus, Tigris-Euphrates and Halil) of Middle, Central and South Asia: Sumerian, whose literary links flow into mythology; Jiroft, the cradle of a new and forgotten civilisation until 2003; the great centres of Central Asia; and the great settlements of Harappa and Mohenjo-daro, with which Shahr-i Sokhta had relations at various levels.

Shahr-i Sokhta, which covers an area of approximately 200 hectares, on the one hand showed processes of local growth well rooted in the cultural fabric of Iranian Sistan and, on the other, between the second quarter of the 3rd and the beginning of the 2nd millennium B.C., it provided extraordinary evidence of a 'long-distance trade' between the main centres of the Near East. In particular, the evidence of manufacturing activities in the settlement and the discovery of large quantities of unworked semi-precious stones such as lapis lazuli, turquoise, alabaster and others have made it possible to recognise, in the centre of Sistan, an area of landing, storage, processing and redistribution of material destined for internal needs and external demand to be found in the Oxus oases, in the fertile valleys of the Halil (Jiroft), in the plains of the Indus valley and in the Mesopotamian alluvial areas, whose archaeological evidence, coming from the major centres of the south (Ur), of Diyala (Khafaja), of the middle course of the Euphrates (Mari) and of Upper Mesopotamia (Tepe Gawra), together with that of Inner Syria (Ebla), is decisive to confirm the presence of two major trade routes that exploited, to the north, the Khorasan route (well known from the later texts of Arab geographers) and, to the south, the Persian Gulf sea route, which, starting from the second half of the 3rd millennium BC, led to the conquest of the Mediterranean Sea. C., gradually replaced the northern artery.

With the end of the 3rd millennium B.C., the prosperity of Sistan's major centre had to disappear gradually and suddenly, for mostly mysterious reasons that involved the major centres of the whole of Middle Asia. Shahr-i Sokhta, like the major centres of the Harappan civilisation, ceased to exist as a result of a crisis that archaeological research tends to explain, not without uncertainty, as a radical and sudden climate change that affected these centres, whose subsistence relied mainly on the region's water resources.

The most recent studies have gathered data that change the chronology of the centre of Shahr-i Sokhta, giving it a new stratigraphic and chronological sequence that 'raises' the life of the settlement by about three to four centuries. Significant evidence suggests that the site behaved as a centre with a heterarchical structure: clan groups of dissimilar tribal origins coexisted in a state of social equilibrium in which hierarchical aspects were intended only within each individual group, in a regime of economic balance likely dictated by the prosperity that the centre must have enjoyed during the first half of the 3rd millennium BC. This heterogeneity, based on an overall social balance within the clan and between groups, prevented the centralisation of the settlement's resources and with it the emergence of a ruling class on the site and in its region; a step that was missed and that did not produce an administrative centralisation and the standardisation of the instruments generally used for the control of large-scale economic realities. Even the recent extraordinary discoveries of hundreds of clay proto-tablets, used for bookkeeping within individual buildings, must be considered forms of family-based administrative accounting, intended for the calculation and management of the economic surplus produced.