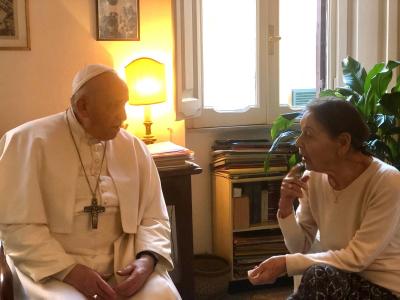 ROME - Pope Francis has recently paid a visit to Edith Bruck, a poet and survivor of the Shoah atrocities, at her house in Rome.

“The conversation with the pope retraced those moments of light which studded the hell of the concentration camps and evacuated the fears and hopes for the time in which we live, underlining the value of memory and the role of the elderly in cultivating it and passing it on to the young,” Matteo Bruni, director of the Vatican press explained.

The pope had read Bruck’s interview with the Osservatore Romano, conducted on Jan. 26, and was greatly inspired. The interview recounted the horrors that she and her family witnessed under the Nazi regime and the subsequent persecution. She is a Hungarian-born Jewish writer, who has spent two thirds of her life in Italy. Having been inspired to meet her, the pope went to visit her at home.

During the consequent interview with Bruck, the pope said, according to Vatican News, that: “I came to her house to thank her for her testimony and to pay homage to the people martyred by the madness of Nazi populism and, with sincerity, I repeat the heart-felt words that I uttered at Yad Vashem, and that I repeat before every person that like you has suffered so much because of this: forgiveness, Lord, in the name of humanity.”

Bruck, who is nearly 90, has spent her life bearing witness to the horrors of Shoah. Two strangers, at the concentration camp, urged her to: “tell them, they will not believe you, but if you survive, tell them for us too.” This promise was firmly kept by Bruck. It has been said that her hopeful look and positivity were particularly striking in her interviews, even when despite recounting the most horrifying moments that she and her loved ones had to suffer through.

Bruck recounted how, having been torn away from her family and the village where she lived, a non-Jewish man gave her a cartload of food to help the persecuted. On another occasion, a German soldier gave her his washing pot “but at the bottom he had left jam” for her. When Bruck was working in the kitchen for the officers, she encountered a cook who said that she had “a girl your age”. The cook then “pulled a comb out of her pocket and, looking at my head of nearly grown hair, gave it to me. It was the feeling of being in front of a human being after such a long time. I was moved by such a gesture of life, of hope.” Bruck believes that it is actions like these that are enough to save the word.