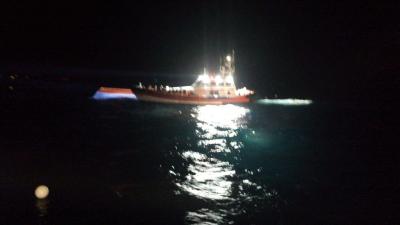 LAMPEDUSA – At around 3:30am on Saturday morning, about 15 miles from the nearest coast, a ship of migrants capsized while attempting to make the crossing from North Africa, a Coast Guard spokesperson has said.

The accident, 15 miles from the coast of Lampedusa – just at the limit of the Italian search and rescue jurisdiction - came at the end of a particularly long day for the Italian Coast Guard due to a high number of attempted landings by migrant ships.

As many as 40 people were rescued by patrol boat CP 324 of the Coast Guard and seven by the Guardia di Finanza vessel V1102. The rescue also involved the use of a helicopter from the Catania Coast Guard.

Around five to ten people are still believed to be missing after the shipwreck, and a helicopter spent much of Saturday morning searching for survivors.

Lampedusa is one of the first entry points into Europe for migrants attempting to make the dangerous crossing from North Africa. UNHCR (UN High Commissioner for Refugees) estimate that one in six migrants who depart the shores of North Africa heading into the central Mediterranean die.