Pope tells footballers 'don't lose the love for the sport' 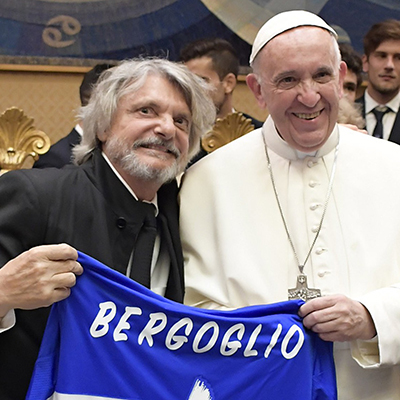 VATICAN CITY – Pope Francis on Friday gave a private audience to the Sampdoria football team in the Apostolic Palace, saying to the players and staff, “football is a way of life.”

The pontiff is well known to be a football fan, following the fortunes of his beloved Argentina, as well as San Lorenzo in the Primera División.

He addressed the players, saying, “I haven’t prepared any speech. I would like to say to you that I am happy, and to say that sport, and also football, is a way of life, of maturity, of holiness. It can bring us forward. But we can never go forward alone, always as a team, this is important.”

He continued, “I want to emphasise two things - the first, in a team, everything is done as a team. The most beautiful victories are those in a team. To the football player who plays for himself, we say “he eats the ball,” he takes the ball for himself and doesn’t see the others. No. Always a team."

“The second thing: don’t lose the love, that is, the love for the sport, the sport that is born from the calling to do it. Other interests are secondary, the important is to always remain in love."

“I wish you all the best. I will pray for you and ask that you pray for me.”