Rome trams to travel at "the pace of man" 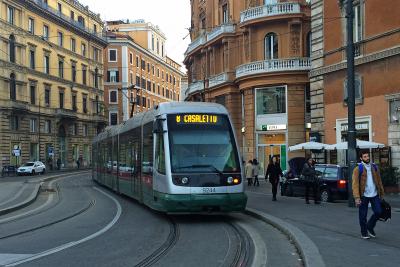 ROME - A new decree issued by ATAC, the Rome transport authority, has ordered that all trams in the capital must drive “at the pace of man” so as to avoid derailing.

This order, released in an internal document, comes as a safety measure while the old and worn out tracks and trams await maintenance.

The five trams lines that run through Rome must keep between five and ten kilometres per hour - the slower in more crowded areas and areas of higher danger, such as along platforms. The previous speed limit along most of the network was between 25 and 30 kilometres per hour. The limit has already been imposed in a few places.

ATAC have prepared “special surveillance to monitor what has been decided,” to ensure that drivers follow the rules.

The drivers will not only risk punishment themselves if they exceed the new limits, but also derailing or loss of control of the trams, given the poor conditions of the tracks, as revealed by a board of experts of the transport authority.

The trams, which run throughout the whole city and serve some of the busiest streets and squares, will have to follow this limit until a new decree has been issued, once the maintenance is finished. This work will include the replacement of tracks, and new anti-squeaking and anti-vibration systems. It is still uncertain when this will be complete.

Fears of derailing were originally raised in June 2019 when a tram derailed in the Piazza di Carracci, allegedly due to a malfunctioning track switch.