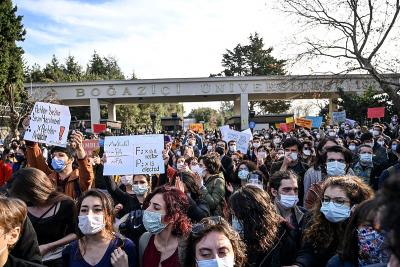 ANKARA -- Students and faculty members at Bogazici University, one of Turkey’s most prestigious universities, are protesting the appointment of a new rector, Melih Bulu, since last month. They object to the­ appointment which treads on a ­decades-long tradition of Bogazici’s rectors being appointed by the university, also arguing that the appointee, Melih Bulu, a former politician, was unqualified for the post.

Academicians at the institution had turned their backs on the office of the new rector in a socially distanced manner carrying out a silent protest calling for his resignation.

Meanwhile, “I never thought of resignation,” professor Melih Bulu had told reporters at protests of his appointment as rector of the university.

While the debate was sparked by weeks of demonstrations, officials said protests against the rector are exploited by terrorist groups for provocation. The international community's comments, and the perception of Turkey in the international arena in light of mounting criticism - in particular around the question of democracy - has provoked a response from Turkish authorities.

Turkey's President Recep Tayyip Erdogan criticized the US and France for their condemnation of the Bogazici protests.  He told reporters "What does America or the European Union say? 'We condemn what happened at Bogazici University.' Well, I'm saying this to the US: 'In the name of democracy, do you not feel any shame over the events that took place in America shortly before Presidential elections?"

Pointing to the incidents in the US prior to the presidential elections, Erdogan expressed, "Remember how everyone threatened each other during the events there; how racism was at the highest; how the cops killed your Black citizens. How would you explain that to the world?"

Turkey's Ministry of Foreign Affairs also slammed the U.S.'s statement about the protests over the appointment of a new rector at Bogazici University, stating that it is nobody’s place to interfere in the internal affairs of Turkey.

In a statement, the ministry highlighted that Turkey guarantees the right to convene and protest under the Constitution.  The memories of the police crackdown on "yellow vest" protesters in Paris and the U.S. Capitol Building invasion in Washington, which was described as a coup attempt, an insurrection and an act of terrorism, are still fresh.

In other words, no country is a stranger to the phenomenon of protesters being radicalized, by domestic or foreign parties, and their exploitation to sell the world certain ideas.

Considering that security forces have been carrying out their responsibilities in line with the law, the ministry also revealed they had uncovered cases of individuals with ties to terrorist groups attempting to provoke the protesters.

“Necessary and proportional precautions are being taken against these unlawful acts,” the statement emphasized. Besides, Turkey's communications director Fahrettin Altun had shared video message on Bogazici protests. "We will do what it takes to protect our youth and universities from radicalization, terrorism, vandalism," said Altun.

Turkish Interior Minister Suleyman Soylu had stated nearly 80 of those recently arrested amid ongoing protests are members of far-left terror groups, including the DHKP/C and TKP-ML. 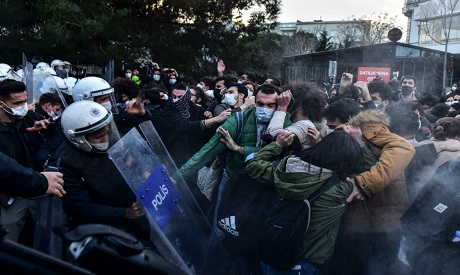 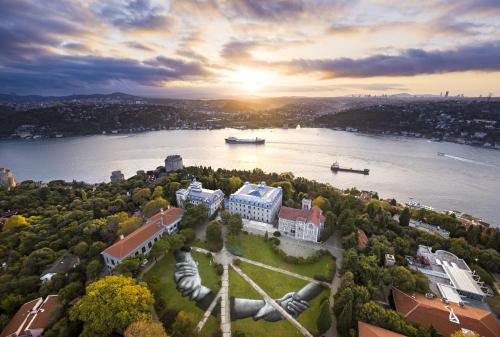