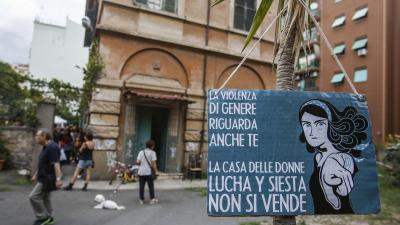 ROME - On Jan. 18, officers from Tuscolano’s police station went into the “House of Women - Lucha Y Siesta” and identified three women who were being protected because they had been abused. This started the police procedure of denouncing them of occupation.

An activist and worker for “Lucha Y Siesta” has spoken out, saying that the police “took advantage of the gate that had been left open, by a child that was going to school, and entered. After this happened, we decided to launch an appeal to ask to file a complaint, which has since been joined by around 480 organisations throughout Italy.”

The open letter, written by “Lucha Y Siesta”, was realised together with the national association, “Women in Network against Violence”, which has around 90 anti-violence centres across the country.

“Since we have been here, we have hosted dozens of women in difficulty, while the branches of orientation and listening have helped around 600 people,” Michela Cicculli, another activist, has revealed.

The building, owned by Atac, Rome’s public transport company, was first occupied in 2008 and has since became a landmark for the city’s fight against gender violence. At the moment it is at auction, due to the insolvency of Atac, who put it up for sale to pay off its debts. The Lazio Region, who has been in charge of safeguarding in recent years, has applied for the acquisition.

The facility provides 13-25 beds in the city for women who are coming out of violent situations. At the moment, however, because of Covid, their availability has been reduced to 4-5 teams at most.