Italian flagship welcomed in US by ambassador 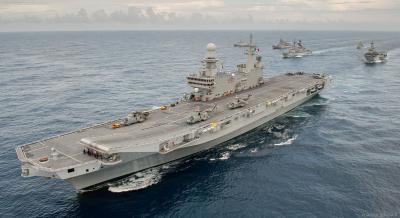 NORFOLK - On Saturday, the Italian Navy Aircraft Carrier ITS Cavour arrived in the homeport of the second fleet of the US Navy in Norfolk, Virginia. The Italian ambassador in the United States of America, Armando Varricchio, welcomed the flagship of the Italian Navy deployed for the Ready For Operations (RFO) Campaign.

The Ambassador, in his speech to the crew and to the Capt. Giancarlo Ciappina, commander of the ITS Cavour, noted that this year occurs the “160th anniversary of the establishment of diplomatic relations between Italy and the United States. Italy and the United States are allies and friends: our relationship is the legacy of the seafaring tradition that prompted a Genoese navigator to face unknown waves and currents”. The Ambassador emphasised how the aircraft Cavour is “an excellent example of our fruitful collaboration in security and industrial sectors”.

ITS Cavour reached the East Coast of the United States after seventeen days of demanding navigation, including ten days of Atlantic Ocean crossing, having left on January 28th her homeport in Taranto. The RFO Campaign is aimed at getting the certification required to operate the new aircraft, the Joint Strike Fighter (JSF) F35-B. “Supporting our Italian allies in certification of their aircraft carrier increases our collective experience in safety and combat abilities” said Vice Adm. Andrew Lewis, Commander of U.S. 2nd Fleet.

After getting the certification in Virginia to operate F35-B, Italy will join an elité of few countries in the world able to rely on an aircraft carrier capability with 5th generation fighters, being in actual fact the only European country that can boast such capability in the post-Brexit EU.

The Ambassador has highlighted how “Today, our relationship is decisively focused on the future and on shared challenges, starting with security. Italy, in its role as current Chair of the G20 and in close connection with the United States, is at the frontlines of fighting the pandemic, of fostering economic recovery, and achieving sustainable development”.

Right on security issues, in the final portion of the Atlantic crossing, ITS Cavour had the opportunity to carry out valuable training in cooperation with US Navy maritime reconnaissance maritime patrol air assets as well as the Arleigh Burke class destroyer USS Stout. Exercises designed to test and prove the carrier’s ability to defend itself against air threats were conducted as well as communication exercises and manoeuvres in formation.