Getting to know Draghi’s new cabinet 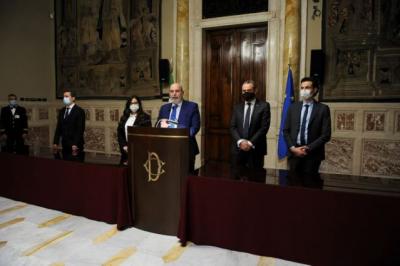 ROME - Mario Draghi’s new government is composed of 15 politicians and 8 technicians. One third of the cabinet is now made up of women.

The following are thumbnail portraits of the main ministers in the new cabinet sworn in Saturday.

Foreign affairs and correspondence: Luigi Di Maio (M5s) - staying at Farnesia is one of the leaders of the Five Star Movement. He has supported the complete turnaround instigated by Beppe Grillo. One year ago, he was dismissed from his role as head politician after the discontent for the internal management. Despite this, he has continued to be an essential point of reference for the decisions made by the Movement. In 2013, newly elected to the Chamber he became the Vice President at Montecitorio. Five years later he became the presidential candidate for Advice for M5s. As leader, he negotiated with the League that lead to the birth of the “yellow-green” cabinet. After the government crisis, he opened a negotiation with the Pd, but in a much more sceptical position, compared to the previous government.

Internal affairs: Luciana Lamorgese - Also the ex-minister of internal affairs of the “Conte 2” government, the only technical of the “yellow-red” executive. She was nominated with the aim to depoliticise the Viminale after Matteo Salvini. She was the prefect of Milan until Oct. 2018 and was then made Venice’s prefect in 2010. In Milan she had promised that an agreement would be reached with the city’s mayors to distribute the migrant quota, frequently disagreeing with some exponents of the League. In 2019 she became the third woman to manage the Viminale.

Justice: Marta Cartabia - in 2019 she was the first woman to be elected president of the Consulate. She is taking over from Alfonso Bonadede and will have to deal with the complex dossier of justice reform on which both Conte 1 and Conte 2 governments have fallen.

Defence: Lorenzo Guerini (Pd) - reconfirmed to the democrats as well as the Ministry of Defence. He was the president of the province of Lodi (1995-2004) and mayor of Lodi (2005-12). He was deputy of the Democratic Party in the 17th and 18th legislature. Since July 18, 2018 he has been president of Copasir. He has also been the reference leader of Base riformista, with a majority in the Pd parliamentary groups.

Health: Roberto Speranza (Leu) - one of the key figures in managing the pandemic. As the leader of Article 1, he was central to the schism of the pd in 2017. He was the 1st regional coordinator of the Pd of Basicilicata and then the coordinator of Pier Luigi Bersani’s campaign in 2013. He leaves in 2015, in disagreement with the decision of the Renzi government. He returned to parliament in 2018, with Liberi e Uguali.

Economy: Daniele Franco - as general director of Bankitalia, he has spent his entire career between the Via Nazionale and the Treasury. From 2014-2019, he headed the State General Accounting Office, which oversees public accounts and the coverage of measures.

Economic Development: Giancarlo Giorgetti - returning to government after have been the undersecretary of the “yellow-green” government, the deputy federal secretary of the League. President of the Republic Giorgio Napolitano, in 2013, chose him in the "group of wise men" for institutional reforms.

Infrastructure and transport: Enrico Giovanni - former chief economist of the OECD. He has promoted the adoption of indicators other than GDP to measure the welfare of the country. Since 2016, he has been the spokesperson for the Alliance for Sustainable Development, which aims to raise awareness of the importance of the Agenda for Sustainable Development. As a minister, he has launched the first national anti-poverty measure, the Active Inclusion Support.

Agriculture: Stefano Patuanelli (M5s)-  founded the Beppe Grillo Trieste Group and from 2011 - 2016 he was a city councillor in the Julian capital. He became a senator in 2018 and he was elected president of the parliamentary group. Since 2018, he has been the referent of the Lex Inscribers function on the Rousseau platform.

Technological innovation and digital transition: Vittorio Colao - has been general manager of Omnitel since 1996 and in 2004 he took over as head of RCS MediaGroup, resigning after being involved in the failed acquisition of the Spanish company Recoletos. In 2006 he returned to Vodafone and in 2008 became CEO of the group that he successfully led for a decade. In April 2020 he was designated by the Conte government to lead the task force on the so-called "Phase 2" for the economic reconstruction of the country.

Ecological Transition: Roberto Cingolani - currently directs the Technology and Innovation Division of the Leonardo Group and is part of the committee of experts created by the Presidency of the Council for the Covid emergency. For 12 years he led the Italian Institute of Technology in Genoa, arousing some controversy for the selection criteria of researchers. In 2020, he wrote "Prevent" on the great environmental and economic social challenges.

Culture: Dario Franceschini - he remains at Culture, one of the strong men of the Democratic Party. Head of delegation of the yellow government, reference point of all the negotiations to keep the Conte 2 government on its feet. Franceschini was among the first to promote dialogue with the 5 stars (the first openings date back to 2018).

Education: Patrizio Bianchi - rector of the University of Ferrara until 2010 and regional councillor for schools in Emilia-Romagna first with Vasco Errani and then Stefano Bonaccini. Known during the pandemic for having coordinated the ministerial task force, formed by the former Minister Lucia Azzolina for the management of school restart. In the essay published by Il Mulino 'In the mirror of the school', published in October, argues that it is "now essential to start a real constituent phase for the school", "a new season in which it returns to be, or rather become, the engine of growth of a country that has been blocked for too long. He is the scientific director of Ifab - International Foundation Big Data and Artificial Intelligence for Human Development.

University: Cristina Messa - career as a research manager, as she has also been vice-president of the National Research Council (CNR), and is a delegate of the Ministry of Education, University and Research in the Horizon 2020 program and a member of the Coordinating Committee of Human Technopole (2016-ongoing). She is author of more than 180 scientific publications.

Tourism: Massimo Garavaglia (League) - undersecretary and deputy minister in the ‘yellow-green’ government. He began his political career in Marcallo con Casone, where he was mayor for 10 years. He was councillor for the Budget in the Lombardy Region in the Maroni junta, a post he left following his election to the Senate. In 2019 he was acquitted of the charge of bid-rigging in the trial on a tender for the transport service for people on dialysis in 2014, when he was alderman.

Equal Opportunities and Family: Elena Bonetti -  member of the PD national direction. In 2014 he signed an appeal, together with Don Gallo, to ask the recognition of gay unions to Parliament and the Church to review their positions "because we all have the right to love and be loved."

South and cohesion: Mara Carfagna - minister after three and a half years at the head of Equal Opportunities in the Berlusconi government, where she was parachuted in without experience, becoming one of the most contested figures of the Berlusconi era. In Parliament since 2006, during this legislature she has been vice-president of the Chamber of Deputies. She was among the main promoters of the introduction of the crime of stalking.

Autonomies: Maria Stella Gelmini -  group leader of Forza Italia in the House. She has already been a minister in the Berlusconi III from 2008 to 2011 in the Department of Institution.

Public administration: Renato Brunetta (Forza Italia) - economist returns to lead the Ministry of Public Administration after 2008-10. Member of Parliament since 2008, as a minister was criticised for his remarks on the "slackers" state employees.

Youth Policy: Fabiana Dadone (M5s) - deputy of the 5 Star Movement at the second mandate. In the past legislature she was a member of the Antimafia Commission. Since 2018 she has been invested with some positions of responsibility within the Movement: she has become the Rousseau referent for the Network Shield function. She was among the signatories of the appeal on Italicum.

Disability: Erika Stefani (League) - entered Parliament for the first time in 2013, elected to the Senate. She is a lawyer: in the last legislature she was part of the Justice Commission and of the Council for Immunities in which she has always held the traditional line of the centre-right.