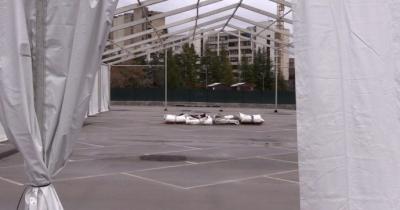 POTENZA - Over the past eight months, Basilicata is still yet to use the marquees, intended for those struck by Covid, due to delays, disagreements and difficult weather conditions, the Fatto Quotidiano newspaper said. The government funds that were earmarked for this region have failed whilst Qatar’s donation has been fruitless.

In October 2020, the governor announced the funds Rome had given, with spending predicted to be nearly two million euros. The marquees will now be used only for the administration campaign. Qatar’s Emir also sent healthcare materials, yet they have gone to waste as do not have the mandatory CE mark, deeming them to be unsafe to use.

The marquees received by Basilicata are intended to facilitate the vaccination process. The success of the supposed “field hospitals”, that were donated by the Emir of Qatar, Tamim bin Hamad al-Thani, had been questioned months ago. Eight months and a couple of million euros later, the “hospitals” are going to be used only to administer vaccinations, rather than taking on its original purpose: to accommodate Covid patients. The Basilicata’s Court of Auditors, chaired by Vittorio Raeli, wants to clarify the current situation. Seven investigations have been opened to get to grips with exactly how the public accounts of Basilicata were used in the pandemic, including those of the Emir’s hospital. “The investigation began back in November, we have delegated the financial watchdog for the investigations and to verify any fiscal damage,” Prosecutor Raeli has explained.

Back in April, when in Italy was at the mercy of the pandemic, the donation from the Emir of Qatar, who is said to be one of the most powerful and wealthiest men in the world, was made. The foreign embassy in Doha reported that there would be a "5,200-square-meter hospital and a second 4,000-square-meter one, with a capacity of 1,000 beds," and that the facilities will be "equipped with modern technical devices and equipment for the treatment of people with coronavirus."

Disputes then followed about where to build the hospitals. As a result of the building works, €469,000 was spent immediately. The second instalment, that was intended to be finished by the summer of 2020, in anticipation of the second wave, was blocked. Potenza, one of the hospital sites, typically receives heavy gusts of wind and snow. As a result, the marquee was likely to be swept away or damage once the weather turned. In other words, the structures were not suitable for the climatic conditions of Basilicata. In October, an agreement was reached with "Minister Speranza who found the funds", explains governor Vito Bardi.

The Region announced that the hospitals would be completed by Dec. 10, yet this promise was not kept. Instead of accommodating Covid patients, or even test swabs, only vaccinations will be held at the sites. "It's not like we're to blame for the delays. To make field hospitals you need money, which at the time the Basilicata region did not have. The fault lies with the government," according to Rocco Luigi Leone, the Councillor for Health.

The idea of a "luxury hospital" is far from being achieved, so it is uncertain as to what the Region will do with the remaining material donated by the Emir. In the pavilions of the Ente Fiera Autonomo Basilicata (Efab) everything that arrived from Qatar has not been used. In May, Basilicata entered into a lease agreement with BSI Srls, with just €500 of share capital, for a monthly rent of €5,000 for three months, with an "extension for a further two months”.

Qatar provided the region with a damaged tent which has since been dismantled. The cots and mattresses, which were made in China, are mostly unusable, some  of them being chipped, rusty and unstable. There are hundreds of masks, gloves, goggles and  protective clothing which still remain in their packaging. The Chinese PPE were without the required CE mark, with one of the manufacturing companies not even appearing in Inail's online list of 700 certified devices.

Having been questioned about this, the Qatari embassy explains that the ambassador Abdulaziz Bin Ahmed Al Malki Al Jehani "at the moment does not give interviews", but they want to specify that "the competences are outside the embassy". Regarding the materials donated by the Emir, the embassy explains that it "has not received any communication on the possible discrepancy between what was donated and what was delivered."