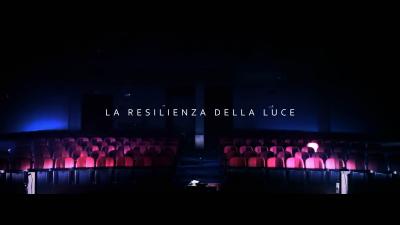 "The Resilience of Light"

ROME - The video “The Resilience of Light", from the EMME EMME Project, which aims to highlight the effect of the current closure of the entertainment industry, is now online.

It has long-been considered bad luck to wish actors “good luck” before their performance. Instead, those who are superstitious prefer to say: “shit” (“merda” in Italian), in order to bring luck to those before they go on stage. Given the ongoing pandemic, the name: “Project EMME EMME EMME” seemed a suitable choice to echo the struggle of those who work in this industry.

“The Resilience of Light”, made at the Teatro Biblioteca Quarticciolo, in Rome, was created by a group of visual art professionals. The innovative decision, to make “light” the lead role in the video, was taken to transmit the message of emergency and desperation which has been felt by the show’s technicians. The aim is to make viewers reflect upon the repercussions of losing these professionals and the world of entertainment. In other words, this group wants us to think about just how crucial culture is.

The video opens with images of an theatre without any audience. The light show then gives a sense of vitality and amateur dancing closes the scene. Though switching on the lights on the stage, with electronic music, the soul of the theatre is reawakened. We are guided through the stalls to backstage, from the gallery to the stage, in a musical and visual crescendo that finishes with a bright hall. When the performer bows, waiting for the audience to erupt into applause, in vain, the lights go off. The theatre is reverted back to being an empty space, without any purpose to entertain. The video concludes with data about the crisis in which the sector finds itself in, since those in this industry have been some of the most hard-hit by the pandemic’s restrictions.